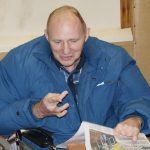 The unlikely news that Vladimir Putin has offered an annual award for excellence in print journalism to Khimki forest reporter Mikhail Beketov has been criticized, entirely justifiably, as a disingenuous attempt to quell international concerns about the state of media freedom in Russia.  The news of the award has at least the virtue of turning some attention back towards the horrific attack perpetrated against Mr Beketov, who lost three fingers, a leg and was severely brain-damaged following a beating by unidentified thugs after he began investigating corruption in the Moscow suburb.  But does little else, say fellow members of the press.  From the New York Times:

Another of this year’s honorees, Sergei Parkhomenko, called the award for Mr. Beketov “absolutely cynical.”

“The people who crippled him are still free, and some of them occupy important political positions,” Mr. Parkhomenko, editor in chief of the magazine Around the World, said in an interview with the radio station Business FM.

Mr. Parkhomenko told another interviewer that he did not intend to go to the Kremlin to accept the prize.

Yevgeniya Chirikova, who worked closely with Mr. Beketov in his investigation of the planned construction of a highway through the Khimki forest, had a similar reaction.

“If the cash prize would cover all of Misha’s treatment, if it would give him back his leg and the third of his brain that has been taken from him, I would vote for it with both hands,” Ms. Chirikova said, using the common Russian nickname for Mikhail. “If this has been done to say once again, ‘Misha is great,’ to the people who built the system that crippled Misha, it’s just cynicism.”

Neither Mr. Putin nor any other government official commented on the prize announcement, which was quietly posted on a government Web site Monday night. One of Mr. Beketov’s supporters said Tuesday that doctors in the Israeli clinic where he was being treated were considering how best to tell him about the prize.

“Let’s hope this news allows him to return to his activities, and receive the prize talking and walking normally,” Lyudmila Fedotova, director of a fund for Mr. Beketov’s support, told the news agency Ria Novosti. “That would be a fairy tale.”