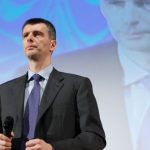 If any doubt remained as to the credibility of Mikhail Prokhorov’s dedication to the notion of democracy, it may have been quashed with the announcement that Vladimir Putin will consider the billionaire and apparent advocate of political pluralism for a position in the government.  Yesterday the President told the press that he would consider offering the tycoon (who received about 8% of the vote in Sunday’s presidential election) a position on the basis that he is a ‘good entrepreneur‘ and a ‘serious person’.  Serious about the power vertical, say those who suspected from the beginning that the oligarch’s candidacy was a Kremlin project.  Today, as the lanky would-be politician continues to flirt with the opposition movement, his detractors feel their suspicions have been vindicated.  From Shaun Walker in the Independent:

Some opposition leaders have said they are willing to work with him but others claim he has never been a real politician. “Prokhorov has been a Kremlin project since the start of his candidacy,” said Sergei Mitrokhin, chairman of the liberal Yabloko party, whose own candidate Grigory Yavlinsky was struck off the ballot. “[Prokhorov] was put on the ballot by Putin because he is loyal, easily manipulated, and is convenient for the Kremlin. He has now fulfilled his task perfectly.”