MH17 and Putin’s Recklessness in Ukraine 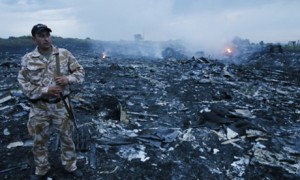 The shooting down of Malaysian Airlines flight MH17 over Ukrainian separatist-held territory yesterday represents an unfathomable, heartbreaking horror – the second tragedy to strike the carrier within months, while almost certainly changing the course of history in the current conflict if not the wider post-Soviet space.

While not all the facts are clear at the moment, almost three hundred people have lost their lives just one day after tougher sanctions went into effect against many of Russia’s top companies and financial institutions. MH17 was flying in approved airspace almost 20 miles above the Donetsk region, and was most likely struck SA-17 Buk 2 surface-to-air missile system. Both Russia and the separatists deny their involvement, claiming they would lack the sophisticated armament to take down a plane, however a June 17 report by ITAR-TASS reported that the rebels had seized control of a Buk system, and two other Ukrainian military cargo planes had been brought down in recent weeks.

Russia gains absolutely nothing from this terrible tragedy, while the Donetsk separatists in fact stand to lose the most, so the argument that the aircraft was intentionally taken down is not very plausible. Russia’s state media is busy pushing a “false flag” accusation that Kiev shot down MH17 with the intention of blaming it on the rebels, but this has not been supported by any of the facts thus far.

Early on in this crisis, social media accounts belonging to the separatists boasted of the shooting down of what they thought was a Ukrainian military aircraft, with the chilling message: “We have issued warnings not to fly in our airspace.” The posts were later removed.

If in fact it turns out that MH17 was mistakenly shot down by Ukraine’s Russia-backed separatists, both Europe and the United States will have to seriously rethink their strategy of working with President Vladimir Putin, who ultimately is responsible for at least indirectly creating the situation in Eastern Ukraine, where sophisticated armaments have fallen into the hands of irresponsible, stateless actors.

For so many years, Western policymakers and businesses have been willing to work on the “presumption of regularity” with Putin’s Russia, the false assurance of a shared value system when in fact the Kremlin has exploited this space to institute a nihilistic power structure of astonishing corruption.

The criminal recklessness on display in Ukraine is not at all accidental, but is rather a hallmark of Putin’s style, which places elite interests and the prestige of the state above the welfare of the individual. It’s happened over and over again – from the refusal of international assistance to the sinking Kursk submarine, the handling of terrorist atrocities both at Beslan and Nord Ost, not to mention decades of conflict in the North Caucasus where warlords have been handed legitimacy and impunity to keep a tight lid on a problem rather than finding a solution.

Putin’s strategy of warming up frozen conflicts along its periphery serves a number of purposes. Beyond just establishing and reinforcing a perceived sphere of influence, the galvanising force of nationalism that came with the first wave of pro-Crimea enthusiasm has distinct short term domestic benefits. But the failure to account for consequences or any sort of long-term planning is the key sign of this criminal recklessness that comes along with the vertical of corruption.

Serious structural reforms are needed in Russia, but this has not been possible in an environment of assumed impunity for any variety of criminal activities. And should the West really be surprised? British Petroleum was falling over itself to make deals even after its CEO Bob Dudley was interrogated by police and nearly incarcerated. Morgan Stanley and Exxon can’t wait to do more and more business with Rosneft despite the fact that the entire value of the company was stolen from Yukos. For months these lobbying forces in both Brussels and Washington DC have fought off tougher sanctions on Russia, and here we see the result of these mistakes.

The changes that will come to these complex geopolitical relationships in coming weeks will be breathtaking – but in many ways, it is long overdue.