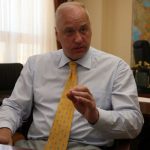 Dmitry Muratov, editor-in-chief of investigative newspaper Novaya Gazeta had told Reuters that he instructed one of his reporters, Sergei Sokolov, to flee the country after the latter received death threats from the bodyguards of Sergei Bastrykin, Chairman of Russia’s Investigative Committee.  Sokolov was, according to Muratov, taken under duress into a forested area and threatened.  Sokolov is believed to have stirred the anger of Bastrykin in late 2010 when he wrote an article accusing him of failing to investigate a massacre of 12 people in southern Russia.  Five prominent journalists, including first deputy editor-in-chief of Ekho Moskvy radio, Vladimir Varfolomeyev have staged an unsanctioned picket in support of Sokolov by the Investigative Committee’s office in downtown Moscow.  Russian police continue to question opposition figures Aleksei Navalny and Sergei Udaltsov and have carried out further searches at the offices of Navalny’s Fund for Fighting Corruption.  The searches of opposition leader’s homes is ‘a tactic critics said smacked of the dark days of Soviet dictator Josef Stalin’, Reuters reports.  Prominent gay rights leader Nikolai Alexeyev has lodged an appeal with the European Court of Human Rights over the St. Petersburg law introducing fines for promoting homosexuality.

Washington has sharpened its criticisms of Russia’s arms sales to Syria’s Assad regime (which has now been accused of war crimes by Amnesty International) with a state department official announcing that ‘on an hourly basis, we are seeing Russian and Soviet-made weaponry used against civilians in towns all across Syria’.  Foreign minister Sergei Lavrov continues to defend the Rosoboronexport contract.  He apparently also accused the United States of arming the Syrian opposition to fight against the government, though this statement, Bloomberg argues, was in fact an error of translation.  An editorial considers Putin’s stance on Syria to be an act of ‘breathtaking cynicism’.  Another backs the proposition made by a Texan senator to cancel Washington’s deals with Rosoboronexport in a stand against its cooperation with Assad.

UEFA has fined Russia’s soccer federation $150,000 following clashes with Polish fans at the team’s opening Euro 2012 game.  Russia has accused Polish soccer fans of sparking street battles with Russian supporters.  Nonetheless, following talks with Poland’s Interior Minister Jacek Cichocki, Russia’s human rights ombudsman Mikhail Fedotov has asserted that sparring between football hooligans will not damage bilateral ties.  In its global peace index, the Institute for Economics and Peace has found Russia to be less peaceful than North Korea. The wildfires currently ravaging Siberia have the potential to be more calamitous than those of 2010, ecologists say.

The founder of pro-Kremlin youth group Nashi, Vasily Yakemenko, has apparently quit his position as head of the Federal Agency for Youth Affairs at his own behest.  Are culture minister Vladimir Medinsky’s attempts to stir opinion on the possible moving of Vladimir Lenin a tactic for provoking fissures in the opposition?  ‘Discussions about removal and re-burial are simply provocative’ says Communist leader Gennady Zyuganov.  According to a new survey, 48% of Russians apparently agree that the body of the revolutionary leader should be interred.