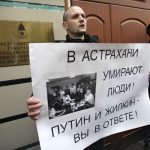 Russia’s Left Front Movement coordinator Sergei Udaltsov has apparently joined the political hunger strike started 25 days ago by Astrakhan opposition politician Oleg Shein in protest against election fraud.  Udaltsov led dozens of demonstrators to Moscow’s Astrakhan region representative office, to protest the disputed elections in the south Russian city, promising ‘rallies here every day until this very important issue is resolved’.  Alexei Navalny has announced his support for Shein via Twitter and apparently plans to travel to Astrakhan, which has become a hub of opposition activity, today.  It girl and opposition protestor Ksenia Sobchak apparently highlighted Putin’s use of political pressure on charities when presenting an award to actress Chulpan Khamatova, who made a video backing his bid for the presidency, by asking if her support for the President elect was genuine.  The Moscow Times reports that the State Duma CIS Affairs Committee is to have a new council designed to neutralize the threat of ‘color revolutions’.  Say goodbye top Russia’s last Yeltsin-era governor.

Russia’s leading investigation authority has intervened in the case of the beating of a 15-year-old schoolgirl at the hands of two female classmates, after the police’s failure to press charges provoked a public outcry. Some speculate that the hesitancy of the police was due to the political connections of one of the attackers.  One of the passengers in last week’s plane crash who was listed as deceased has been found alive in a hospital.  A number of Poles who claim that the Smolensk air disaster which killed Polish President Lech Kaczynski in 2010 was an assassination have protested outside the Russian Embassy in Warsaw and burned an effigy of Vladimir Putin.  Apparently one in five Poles believe that the crash was an ‘attack” on the then president.

Syrian Foreign Minister Walid Muallem has arrived in Moscow in an attempt to illicit support for the crumbling Bashar Assad regime.  A Russian diplomat has told Reuters that the Kremlin is working with the Syrian authorities to put an end to violence and begin negotiating with the opposition.  Moscow has criticized North Korean plans to launch a rocket on the basis that such a move would contravene UN Security Council resolutions.  Russian’s Deputy Prime Minister and former NATO envoy Dmitry Rogozin has flatly denied rumors that the city of Ulyanovsk will host a NATO base.

Russia’s Far East is braced for forest fires as unseasonally warm weather and strong winds reach the Primorye Territory. Congolese defender Chris Samba discusses racism in Russian football.  ‘[T]he few senior Russian officials who know the true value of the secrets that Bout is holding would be willing to pay dearly to make sure that Washington never learns more than it already knows’.  Georgy Bovt considers the price Russia is willing to pay for its ‘Merchant of Death’.