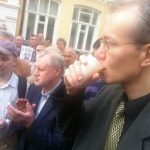 Astrakhan’s Just Russia leader Oleg Shein has pledged to ‘lighten’ his hunger strike in a gesture of goodwill towards the Central Elections Committee after its head, Vladimir Churov, promised party leader Sergei Mironov that he would examine evidence of electoral fraud.  At a special session of Astrakhan’s regional legislature, local prosecutor Oleg Dubak said that an inquiry into Shein’s complaint has found only a ‘few minor violations’, insufficient to warrant a re-run of the election.  Churov has told the press that as of yet he sees no reason for annulling the mayoral election results.  Shein’s hunger strike has attracted international media attention, but how do locals feel about the action? asks Reuters.  ‘Their indifference poses a major challenge for antigovernment activists from Moscow who have flocked south in recent days to lend him support’ says the New York Times.  Fear of losing their jobs by showing active support for the opposition is the reason, says one resident interviewed in the Washington Post.  The Independent argues that the State Duma walk-out shows that the local action is having a national impact. Convicted Russian arms dealer Viktor Bout has called on Russia to file a lawsuit on his behalf against the United States and Thailand to the International Court of Justice.  ‘Judging by the Russian media, however, you would think that Bout was an innocent businessman who only sold civil airplanes and transported humanitarian aid to Africa’.  Russia and the US are apparently in agreement that Bout’s fate should be resolved in accordance with the law.  A visa relaxation agreement between the two nations has hit the skids, says the Moscow Times.

Russian Deputy Foreign Minister Sergei Ryabkov has insisted that Russia disassociate itself from words in a G8 statement that singled out homosexuals as a separate group whose rights need to be protected.  According to a new poll, 63% of Russians do not believe that politicians have genuine religious feelings.  A Moscow court has dismissed a libel suit filed by Stalin’s grandson, Yevgeny Dzhugashvili, against a Federal Security Service officer who said that the Soviet leader was to blame for the 1940 Katyn massacre.  Russia has urged the UN to send observers to Syria to monitor the cease-fire agreement.  The Foreign Ministry has warned Russian nationals not to visit Georgia, on the basis that the country’s special services ‘oppress’ Russians.

Yesterday Russia celebrated Cosmonauts Day in memory of the first manned flight into space by Yuri Gagarin on April 12, 1961.  Halcyon days, says ITAR-TASS in comparison with the Kremlin’s current space efforts.  Putin has announced that Moscow will allot around $1 billion this year alone to the construction of a new space launch pad in the far east, designed to reduce the Russian space program’s reliance on neighbor Kazakhstan, giving the industry a ‘second wind’,to quote Dmitry Rogozin.