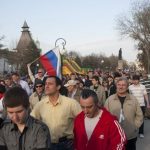 More than 2,000 Russians took to the streets in Astrakhan on Saturday, where Just Russia leader Oleg Shein has been on hunger strike for nearly a month, in protest against electoral fraud, Reuters reports.  At least 10 people were arrested.  Police apparently estimated a turnout of 300-350 people.   A rival rally in favor of elected candidate Mikhail Stolyarov was held in another part of the city, attracting a crowd, police say, of 5,000 people.  Local police are apparently collecting material to draw up an administrative case against Shein (who can be heard here discussing aggressive police tactics against protestors) for instigating an unsanctioned rally.  The hunger striker may go to Moscow to meet with Vladimir Churov, head of Russia’s Central Election Commission.  PACE monitors are finalizing their report on March’s presidential elections, which they say, ‘lacked […] citizens’ trust’.  Indefatigable Khimki Forest campaigner Yevgenia Chirikova is one of six people across the globe to have been awarded the $150,000 Goldman Environmental Prize, dubbed the Green Nobel Prize, for her work in local campaigning.  Russia has turned down an appeal to uplift a ban on NGO Justice Initiative, which provides support for victims of alleged human rights abuses in the North Caucasus.

Interior Minister Rashid Nurgaliyev has stood firm regarding calls for his resignation despite a wave of allegations of police brutality under his watch.  A drunk off-duty police officer has killed a mother and daughter after driving onto a sidewalk in St. Petersburg.  A new poll has shown that 51% percent of Russians apparently relate negatively to sexual minorities.  Patriarch Kirill has waved off recent criticisms of the Russian Orthodox Church at an Easter service attended by President Dmitry Medvedev and Prime Minister Vladimir Putin.  Will Britain take Russia to task over human rights abuses when it chairs a prominent conference on the future of the European Court of Human Rights today?  The Guardian reports on how the FSB is seeking to exert greater control over the Internet.  The latest in a series of gubernatorial shakeups, Kostroma region governor Igor Slyunyayev has resigned.

For Pakistan, improving ties with Russia is apparently a foreign policy priority.  ‘As Dmitry Medvedev prepares to leave the Kremlin, there is much to be said about his accomplishments in the foreign policy sphere’.  Why Russian warships off the coast of Syria are sending mixed signals.

Tomorrow will see the premiere of Julian Assange’s much anticipated Russia Today talk show.  He talks to RT about being a ‘traitor’ here.