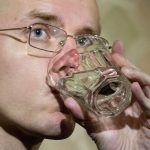 The Central Election Commission has argued that violations during the disputed March 4 mayor elections in Astrakhan, which prompted Just Russia candidate Oleg Shein to undertake a hunger strike, were ‘procedural’ and could not affect the results of the vote.  ‘[E]verybody knows that Putin answers to nobody, least of all to voters. Sooner or later, this will be his undoing‘: Yulia Latynina warns the Prime Minister against ignoring Shein’s grievances.  The politician, who is in his fifth week of hunger strike, said he was confident that Russian courts would invalidate the election, but has not ruled out recourse to the ECHR.  Brian Whitmore explains how the Kremlin will have to draw up new strategies to neutralize the opposition if local politicians continue to bring electoral fraud to light.  Police have detained a score of Greenpeace activists found protesting against Exxon’s joint plans with Rosneft to drill for oil in the fragile Arctic zone.  A group of United Russia deputies have proposed increasing penalties for protest organizers and participants, including a major leap in the maximum fine.   Six teenagers have been arrested in Moscow for holding an anti-religion demonstration in front of an Orthodox church.

WikiLeaks founder Julian Assange began his career as TV anchor last night by interviewing Hezbollah leader Hassan Nasrallah on his new Russia Today TV show.    The Guardian’s Luke Harding is skeptical about Assange’s role on a station which acts as a mouthpiece for the Kremlin.  The hacking expert has defended RT as a ‘natural partner’ given that his organization’s ‘major confrontation is with the West’.  In a move welcomed by the OSCE as a ‘positive development‘, President Medvedev has signed a decree to establish a commercial-free, public television broadcast service that will be launched on January 1, 2013.

Russia’s Foreign Ministry has warned that unnamed ‘external forces’ are jeopardizing Kofi Annan’s ceasefire plans in Syria.  Four people have been stabbed in an ethnic clash in Moscow.

‘I’m a history teacher. If I tell my students that homosexuality was very widespread in Rome, does that mean that I’m involved in propaganda?’  The Washington Post considers the parameters of St Petersburg’s anti-gay law.

PHOTO: Astrakhan’s ex-mayoral candidate Oleg Shein drinking a glass of water on Tuesday, April 17, 2012, during the fifth week of his hunger strike. Shein says he won’t eat again until the disputed results of last month’s election are overturned and has slammed officials for stalling a probe into voting fraud. (Vladimir Filonov / MT)