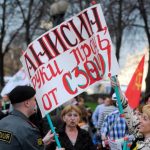 President-elect Vladimir Putin has announced he will step down as chairman of the increasingly unpopular United Russia party, saying that the Russian president should be a ‘non-partisan figure.’  Current President Medvedev should take the helm, Putin has suggested.  Analysts tell Ria-Novosti why Medvedev and United Russia are ‘a poor fit’.  In a televised address, the soon-to-be Prime Minister has reiterated his alleged commitment to ‘the development of civil and economic freedoms‘.  Medvedev has pledged that proposed reforms for increasing political pluralism will strengthen the government, among them, the promise of direct gubernatorial elections.  This article points to evidence that the reforms will be less robust than promised.

Putin’s spokesman Dmitry Peskov has explained the Prime Minister’s disinterest in cooperating with leaders of the political is because many are uncharismatic ‘zeroes.’   RFE/RL charts the political progress of Astrakhan’s A Just Russia leader Oleg Shein, who has reportedly put an end to his hunger strike. A Just Russia stalwart Gennady Gudkov has teamed up with a group of party deputies in order to discuss the creation of a united alliance of leftist forces.  A protest against educational reform which would reduce federal financing for schools, attracted 200-300 people to Moscow’s Novopushkinskaya Ploshchad.

Activists are apparently planning to hold a gay pride parade in Moscow on May 27, the theme of which will be the ban on ‘homosexual propaganda’.   Moscow City deputies are apparently considering the creation of similar law but one which would incorporate all kinds of ‘sexual propaganda’.    ‘There might be people who are angry with the Pussy Riot stunt, but even angrier over the scandals involving Kirill’s watch and apartment and the luxurious lifestyle of the clergy as a whole’, says Yulia Latynina, who believes that some of Moscow’s devout must be unimpressed with the Church’s behavior of late.

Russia has urged neighbor Ukraine to fully observe the rights of jailed Ukrainian ex-Prime Minister Yulia Tymoshenko, who is on a hunger strike.  Deputy Prime Minister Dmitry Rogozin has stated that Russia will not supply Syria with S-300 missile systems, but only defensive weapons.  Reuters has an in-depth report on how Russia is failing to put a stop to the spread of HIV.

PHOTO: Between 200 and 300 protesters denounced education reform at the rally on Novopushkinskaya Ploshchad, April 24, 2012. (Ridus.ru)