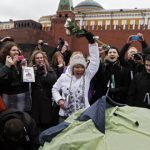 Hundreds of opposition activists, among them Left Front leader Sergei Udaltsov and opposition politician Boris Nemtsov gathered for the unsanctioned ‘White Square’ rally in Red Square on Sunday.  Police allowed the participants to enter the square, but detained three protestors, including Khimki forest defender Yevgenia Chirikova, who attempted to pitch a tent by the Kremlin walls.  ‘The tent is a symbol of our resistance to the illegitimate government‘.   Police in St Petersburg have detained two people holding placards reading ‘It’s normal to be gay’ in violation of the new law banning homosexual propaganda.  Human Rights Watch has urged that the attack on Novaya Gazeta journalist Yelena Milashina be thoroughly investigated.  The New York Times reports that the charges against one of just two people held accountable for the death in custody of Sergei Magnitksy have been dropped.  A senior executive from Hermitage Capital, the firm for which Magnitsky worked, has expressed fears for his life after his home address in London was leaked to officials allegedly involved in the lawyer’s death.  Several police officers in the Siberian city of Krasnoyarsk have apparently been charged with torture.

Could it be the end for Nashi?  The pro-Kremlin youth group has denied reports that it is headed for imminent liquidation.  Click here to see who Reuters suggests is the favorite to replace Sergei Shmatko as Energy Minister.  The new governor of the Moscow region, Sergei Shoigu, has told a radio interviewer that he believes the capital of Russia could be moved from Moscow to Siberia.  The Moscow Times has a useful, minister-by-minister overview of the highs and lows of the outgoing cabinet.

RFE/RL reports that, according to Russian newspaper Izvestia, the deployment of the new S-400 Triumf surface-to-air missile system in the Kaliningrad enclave has begun.  Around 800 people in Ulyanovsk have held an anti-NATO picket in the city’s airport where the organization plans to establish a transit base, prompting local fears it will turn the city into ‘the largest drug trafficking center’ in Europe.  Communists in the town have begun a hunger strike.

RFE/RL has an interview with Aleksandr Likhotal, one time adviser to former Soviet leader Mikhail Gorbachev in which he discusses Russia’s ‘acute’ sense of unhappiness.