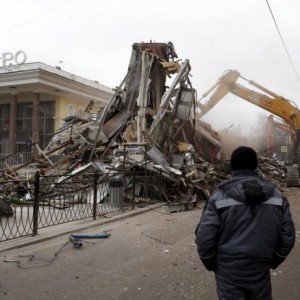 Following multilateral talks in Munich, Russia has reportedly agreed on the need for a ceasefire in Syria, but suggested that it be put in place on March 1, to the consternation of Western officials who wish to see it effected immediately.  ‘If it wasn’t for Russia, we would have chopped Assad into pieces by now. This war was almost over four or five months ago. Then Russia came in,’ complains one rebel fighter interviewed by Reuters.  The Foreign Ministry has accused UN Secretary-General Ban Ki-moon of being part of a campaign to ‘distort’ Russia’s role in the Syria crisis.  The Kremlin has hit out at NATO’s plans to deploy the largest number of troops in eastern Europe since the Cold War, dismissing the idea that the move is defensive.  Rather, says a Foreign Ministry spokesperson, ‘[t]he goal is to keep Russia in check‘.  Nor is Moscow wildly keen on Washington’s plans to build a missile shield in South Korea.  U.S. National Intelligence Director James Clapper has accused Russia of being ‘paranoid’ about NATO and suggested the Kremlin will continue to pursue aggressive actions over the course of 2016.  Another leading military official in the U.S has seconded the idea that the NATO must not hesitate to ‘confront’ Russia when the need is apparent.

The flurry of demolitions that took place in Moscow on Monday despite considerable protests is apparently likely to continue.  Data collected by the Washington Post shows that labor protests reached their highest point last year since 2008, surpassing those witnessed during the economic crisis.  In 2015, the spending of Russians exceeded their income for the first time in 18 years, due perhaps in part to the fact that citizens have needed to repay loans quickly, make bank deposits and purchase foreign currency.  The Guardian reports on how the country’s 115 million debtors are facing alarmingly violent methods from collectors.

Fear for oil prices seems to have outweighed suspicion towards OPEC as Rosneft chief Igor Sechin has reportedly proposed a ‘coordinated supply cut’.  Foes during the Cold War, Russia and Pakistan are now planning to hold their first joint military drills on land, indicating that Afghanistan is once more a source of concern for the Kremlin.

PHOTO: A worker watches as an excavator is used to demolish illegal street kiosks and stalls near Chistiye Prudy metro station in Moscow, Russia, Feb. 9, 2016.