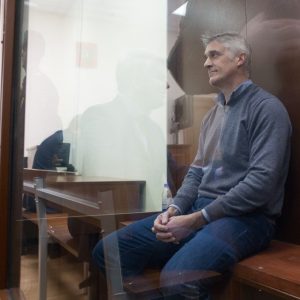 “[A]n emergency for the economy” is how former finance minister and Kremlin heavyweight Alexei Kudrin has described the arrest of Baring Vostok’s US founder Michael Calvey on fraud charges. Bloomberg notes that even insiders unfazed by the tempestuous business climate in Russia have been shocked by the move, prompted by a dispute with two other shareholders at Bank Vostochny Express, Artem Avetisyan and Sherzod Yusupov. The two men are believed to have links with the FSB; the latter had filed a complaint with the security services over Calvey’s behaviour less than a week prior to his arrest. Calvey has, at least, the support of Sberbank chief executive Herman Gref, who hopes the charges are a “misunderstanding” and Kirill Dmitriev, the head of Russia’s state wealth fund, who is “ready to provide a personal guarantee” for the jailed American. The reason Putin has no qualms about frightening foreign investors, argues Leonid Bershidsky, is because his hopes for Russia’s economy are pinned on the gargantuan state companies whose expansion he has overseen, rather than entrepreneurs from home or abroad.

The European Union plans to expand its sanctions list as a response to a naval incident in the Sea of Azov last November. EU sanctions cost Russia $2.42 billion in 2018, US sanctions $1.17 billion, and Ukraine’s restrictions $775 million, new figures from the Economy Ministry show. Production of Russia’s first post-Soviet mainline commercial aircraft has stalled as a result of US sanctions. Good news for Oleg Deripaska, however: his aluminium producer Rusal is in talks to resume reinsuring its risks with Western companies after the United States lifted sanctions on the group.

Independent newspaper Novaya Gazeta has reported that one of its correspondents and a Memorial rights activist were detained without explanation at an airport in Amsterdam. In southern Russia, journalist Dmitry Kosenko, working for independent news outlet Vash Golos, was attacked over the weekend, an incident likely linked with an anti-corruption investigation into a local official the outlet has been running. The former warden of a notorious prison in Yaroslavl has been arrested in a high-profile torture probe. A video report from the BBC examines how women in Saransk are intervening to plug the gaps in healthcare.

PHOTO: Michael Calvey during a hearing at the Basmanny District Court in Moscow on Feb. 16. (Andrey Rudakov/Bloomberg)