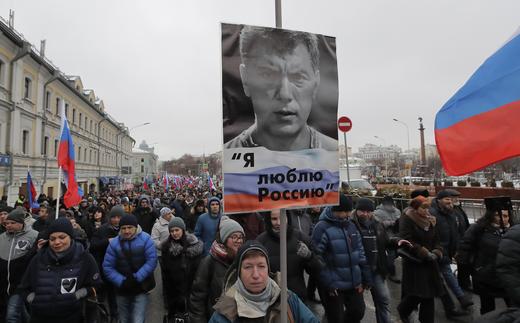 Thousands marched in 20 cities across Russia over the weekend (with at least 10,000 in Moscow alone) to mark the fourth anniversary of the murder of Kremlin opponent and former Deputy Prime Minister Boris Nemtsov. Many protesters used anti-Kremlin slogans, which opposition politician Ilya Yashin described as “a march in opposition to Vladimir Putin […] for a free and democratic Russia.” Nemtsov was shot on a bridge near the Kremlin on February 27, 2015. At the time, he was investigating Russia’s role in the Ukraine conflict. President Vladimir Putin has ordered the creation of a list of priority actions to support pop music and visual arts, with special attention to genres that young Russians are most enthusiastic about. A cardiologist who was a finalist in the Leaders of Russia competition last February is now under investigation for embezzling $20 million from his medical research centre.

The Federal Penitentiary Service (FSIN) is finally investigating conditions at the infamous IK-14 prison in Mordovia, “one of the most dreaded female correctional facilities in the country.” The Investigative Committee is looking into allegations that it tortured members of the Jehovah’s Witnesses religious group in Surgut earlier this month. Ahead of his denuclearization summit with Kim Jong Un, US President Donald Trump lauded sanctions placed on North Korea’s border by China and Russia.

The Defence Ministry is conducting a nation-wide tour of over 500 war trophies collected in Syria, such as tanks and suicide bomber vehicles.

PHOTO: People attend a rally in memory of Russian opposition politician Boris Nemtsov, who was assassinated in 2015, in Moscow, Russia February 24, 2019. The placard reads “I love Russia”. REUTERS/Maxim Shemetov