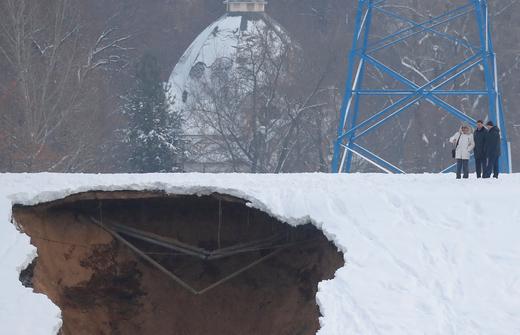 Just days after Germany vowed to assist German and EU companies to protect against “massive collateral damage” stemming from US sanctions against Russia, the US threatened Germany with sanctions of its own for continuing to back the Russian-led Nord Stream 2 gas pipeline. Gas producing giant Novatek is looking into adding storage facilities on a southern Japanese island for its Arctic LNG. Members of the US Senate want to force a reversal on President Donald Trump’s decision to relax sanctions on companies connected to oligarch Oleg Deripaska, arguing that his control has not been sufficiently limited. A Moscow municipal lawmaker revealed that the automated vote counting system in the city Duma was falsifying votes, after 33 votes were registered for a meeting attended by only 26 people. The Duma’s chairman responded that he trusts the machine fully. Since the 2014 annexation of Crimea, Estonia has stepped up funding and new projects for the city of Narva, where 90% of the population is ethnic Russian.

A company owned by Arkady Rotenberg, a childhood friend and long-term ally of President Vladimir Putin, won a $688,000 grant to conduct anti-corruption training and the development of civil society. A Moscow court has thrown out a slander lawsuit against opposition leader Alexei Navalny by Putin’s bodyguard Viktor Zolotov. The Investigative Committee has responded to claims that the three Russian journalists murdered in the CAR were victims of a targeted attack by a private military contractor allegedly controlled by “Putin’s Chef” Yevgeny Prigozhin. The committee blamed the deaths on the Mikhail-Khodorkovsky-funded media outlet that they were working for. The Defence Ministry is drafting rules that would allow the military to shoot down hjiacked passenger jets. “Sadly, people on the plane will die, but this will prevent a more terrible catastrophe,” commented one senator.

Novaya Gazeta reported last week on a drastic increase in the persecution of LGBTQ individuals in Chechnya in the past month, including the claims that at least two people died after being tortured. Local social media groups are urging LGBTQ community members to destroy their online presence.

PHOTO: A view shows a sinkhole, which reportedly caused a flood in a traffic tunnel in Moscow, Russia. (REUTERS/Maxim Shemetov)