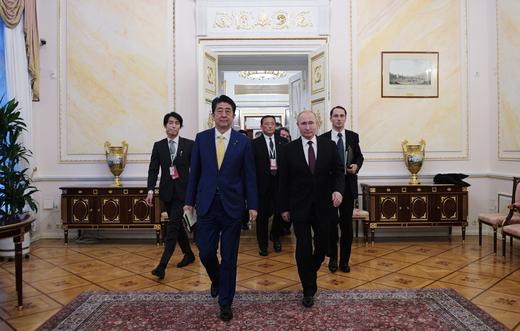 Anastasia Vashukevich (aka Nastya Rybka), the Belarusian model and escort who posted compromising images of billionaire Oleg Deripaska, on Instagram, has been released from custody in Moscow. She remains a suspect in a case of charges relating to prostitution. Opposition politician Alexei Navalny’s Anti-Corruption Foundation (FBK) is pushing for the Investigative Committee to press charges against Deripaska for using bribery to organise her arrest, and for procuring prostitution services himself. US sanctions have forced oligarch brothers Arkady and Boris Rotenberg to sell their private jets (following the earlier examples of Deripaska and Gennady Timchenko).

During their meeting in Moscow yesterday, President Vladimir Putin and his Japanese counterpart Shinzo Abe included the controversial issue of the disputed Kuril Islands in their discussion, but no details have been released as yet. Bloomgberg interprets the early silence as the failure to reach a breakthrough. Putin says that any deal regarding the territorial dispute needs to have public support. “Russia may have annexed Crimea, but it has lost Ukraine,” the New York Times discusses Ukraine’s autocephaly and, in the run up to it, Putin’s increasing reliance on the church as a fundamental aspect of Russian identity.

Across the world, Russians are the least trusting of their country’s institutions, including NGOs, businesses, and the media. The head of the World Anti-Doping Agency (WADA) defended the organisation’s decision not to penalise Russia despite its missing the deadline for delivery of data relating to accusations of state-sponsored doping.