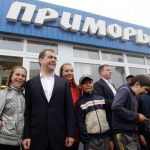 Russia’s presidential Human Rights Council has lambasted a new bill which would curtail all Internet content of an ‘extremist’ nature.  Both Yandex and Google Russia are opposed to the bill in its current form changes to the bill.  Nashi commissar Konstantin Goloskokov has become the latest Kremlin loyalist to accuse opposition leader Alexei Navalny of corruption and tax evasion.  Rock band Faith No More have offered a tribute to incarcerated punk feminists Pussy Riot at their Moscow concert.   The Moscow Times reports that the presidential administration plans to fund student clubs as a way of distracting restive youths from the opposition movement.  Anti-Putin figureheads plan to keep the opposition energized with a summer motor rally through Russian regions.  The Kremlin’s new bill that would designate NGOs ‘foreign agents’ is ‘fraught with the risk of catalyzing public discontent’ says Itar-Tass World Service writer Lyudmila Alexandrova.  Brian Whitmore agrees that the ongoing crackdown may well isolate the President.   The New York Times examines the unusual trajectory of Ksenia Sobchack here.  The United Russia city deputy responsible for St. Petersburg’s anti-‘homosexual propaganda’ law is gearing up for a possible showdown with Madonna this weekend, after the singer pledged she would defend gay rights at her upcoming concert.

Moscow apparently believes that the Western-led Friends of Syria group is superfluous following the weekend’s Geneva meeting on the conflict-riven state.  Foreign Minister Sergei Lavrov has asserted that the agreements made at said meeting, ‘are not there to be interpreted’  following reports of a shift in Russia’s stance.  According to the Moscow Times, it has been suggested that the West is trying to convince Russia to offer Syrian President Bashar Assad political asylum, although Russia claims it has no intention of doing so.  An analyst quoted by Bloomberg warns that if the Syria resolution is not to Russia’s liking, it may respond by ‘selling S-300s to Iran’.  The prospect of a possible global arms trade treaty is unlikely to please Russia, says this article.

In a move that has deemed ‘extremely regrettable’ by Japan, Prime Minister Dmitry Medvedev has made a visit to Kunashir on the disputed Kuril islands.  The Ukrainian parliament has approved in the final reading a bill that would elevate the status of the Russian language in the country.