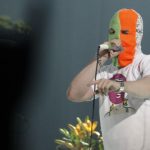 Pussy Riot supporter Tatyana Romanova has filed a police complaint after allegedly being beaten by a member of the Russian Orthodox church at a protest for the imprisoned anti-Putin punks two days ago.  RFE/RL quizzes Roddy Bottum, the keyboardist from US rock band Faith No More about why the band chose to show solidarity with Pussy Riot at their recent Moscow concert.  Investigative Committee head Aleksander Bastrykin has taken his regional colleagues to task over for closing a probe into the work of activist Alexei Navalny; the criminal investigation has now been re-opened by federal agents.  The Economist looks at the tax probe launched against Just Russia deputies Gennady Gudkov and his son Dmitry, who are facing a campaign of intimidation by the Kremlin for their liberal stance.  The Moscow Times reports on the duma debate over the latest opposition-quashing bill here.  Hardly surprisingly, St. Petersburg authorities have withdrawn their permission for an LGBT rally in the city.  A Moscow court has ruled to extend the detention of a schizophrenic ex-serviceman who was accused of participating in the violence that broke out at the May 6 March of a Million rally.  This article examines increasingly militant ultranationalism.

Russia has reiterated that it has no plans to offer political asylum to Syrian President Bashar al-Assad.  ‘Syria is seen as one of the last symbolic remnants of Moscow’s superpower status that was the trademark of the Soviet Union’, says this op-ed on the reasons for Russia’s refusal to denounce the Assad regime.  The Guardian’s Miriam Elder draws on a range on opinions on the Syria issue here.  Iran’s Defense Ministry and the Aerospace Industries Organization have reportedly filed a $4 billion law suit against Russia’s state arms corporation Rosoboronexport in an international court in Geneva over a suspended deal to buy missiles.