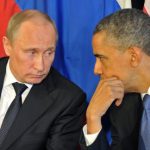 At their meeting on the sidelines of the G20 summit in Los Cabos, President Putin and US President Barack Obama apparently enjoyed ‘beneficial, open dialogue’, to quote Kremlin Press Secretary, Dmitry Peskov.  The Washington Post reports the pair ‘shared little eye contact and did not appear to express much personal warmth’ after their two-hour meeting.  Putin told the press inconclusively that many ‘common points’ had been found on the Syria crisis and that discussions would be continued.   ‘[C]rucially, Obama failed to secure the support of Putin for regime change in Syria’, says the Guardian.  Meanwhile it has been reported that Russia is preparing to send two warships to the Syrian port of Tartus, where Moscow operates a strategic naval base, to protect the safety of its nationals.   Mark Adomanis interprets this controversial move here.

Following his talks with Obama, Putin has pledged, despite ‘disagreements in our assessment’, to continue seeking methods of resolving the problematic aspects of missile defense.  The US has praised Russia’s contribution to US and NATO operations in Afghanistan and the Russian President has underscored his hopes to continue the reset.  Ria-Novosti reports that Washington believes that the Magnitsky sanctions and the repeal of the Jackson-Vanik amendment need to be clearly separated.  Those backing the sanctions have been angered to note that some names on the blacklist could be kept secret.  Are relations between Germany and Russia rocky?

Opposition leader Alexei Navalny has called on members of the public to write political slogans on each banknote they handle. Authorities in Nizhny Novgorod have rejected an application to hold a ‘March to the Store for Bread.’  Criminal charges are being filed against four more demonstrators arrested at the May 6 opposition rally.  Click here for an interview with chessmaster and opposition mandarin Garry Kasparov.  United Russia has won the Omsk mayoral election.

The search continues for a missing An-2 plane last seen in the Sverdlovsk region on June 12.  Environmental activists are calling upon President Putin to take measures against the illegal poaching of polar bears.  Authorities in Sochi apparently plan to fine residents who refuse to beautify their houses in preparations for the Winter Olympics.  Putin may grace the London games with his presence to watch a judo contest.  A state of emergency has been declared in seven parts of Russia’s eastern and far eastern territories due to forest fires.