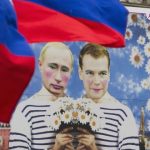 President Putin will arrive in Israel today on the start of a Middle East tour. ‘Russia finds itself in a very unpleasant situation: It has essentially put itself in opposition to the entire Arab world’, says one analyst here of the Kremlin’s stance on Syria.  Foreign Minister Sergei Lavrov has defended the export of air defense systems and disassembled helicopters that were being carried on Russian ship the MV Alaed on its abortive trip to Syria.  The Alaed will return to Syria, but this time with an escort.  It was noted by Reuters that Russian-bought air defense systems were instrumental in the shooting down of a Turkish warplane on Friday.

The indictment of Pussy Riot ‘wouldn’t have raised eyebrows if it had been written by a 16th-century court during the Inquisition. But in the 21st century, it is shocking,’ says Victor Davidoff in the Moscow Times.  United Russia deputies are apparently planning to toughen the Criminal Code to shelter the Orthodox Church from public criticism.  Reuters ponders Putin’s protean new identity.

The Head of the Moscow Helsinki Group, Lyudmila Alexeyeva has become the latest activist to leave the Russian Presidential Human Rights Council.  A Just Russia leader Oleg Shein has become one of the first activists to fall foul of the new law on protest fines.   First Deputy Prime Minister Igor Shuvalov has told a St Petersburg Economic Forum panel that protests are ‘the new norm for us. […] We need to learn how to live with this and what we should do to meet people’s needs’.  Berlin’s gay rights activists took aim at Russia’s harsh official stance on homosexuality at a rights parade which attracted more than 700,000 people.

Following threats by Putin’s administration, the US is hoping that Russia will not retaliate over the proposed Magnitsky sanctions.  NTV plans to broadcast a controversial film about World War II despite warnings from the Culture Ministry.  A new poll suggests Russians’ knowledge of history is becoming somewhat hazy.