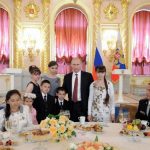 TODAY: Russia refuses to shift on Syria despite mounting criticism; EU leaders set to work on Putin at St Petersburg summit; authorities seek to knuckle down on activists’ use of social media; teacher fined for whistle-blowing on election fraud. Think tank suggests Russians not so divided over the nation’s political future; farewell Mr Trololo

Following a meeting with German and French leaders in Paris, Russia reportedly agreed to increase pressure on the Syrian government, though disagreements between French President Francois Hollande and President Putin on the need for sanctions were made clear.  US Secretary of State Hillary Clinton has argued that Moscow appears to support the Assad regime.  On Friday the Kremlin defended the theory that the Houla massacre was a ‘well-planned action by militants’ as opposed to government forces.  President Putin has denied that weapons Russia supplied to Damascus were for the purpose of killing rebels.  Following a conversation with Kofi Annan, Foreign Minister Sergei Lavrov reiterated his belief that there is no alternative to the Annan plan.  It is expected that at today’s Russia-EU summit in St. Petersburg, where Putin will meet with European Council President Herman van Rompuy and European Commission President Jose Manuel Barroso, that European powers will press the President to change his stance on Assad.  ‘[I]t’s unclear what leverage the European institutions could bring to force a change of strategy in Moscow’ argues the New York Times.  These doubts are, it would seem, shared by the head of the US House of Representatives Foreign Affairs Committee. President Putin’s top security adviser has told the press that foreign-run websites are being used to stir-up anti-Kremlin sentiment, indicating that the authorities may seek greater control of social media sites used by activists.  According to a new study by Alexei Kudrin’s think tank, the Center for Strategic Research, the notion of a political divide between the urban middle classes and the population of the provinces is a myth.  Rusnano chief Anatoly Chubais apparently believes that the era of stability in Russia is over.  A St Petersburg court has ordered schoolteacher Tatyana Ivanova to pay a fine after making public falsifications she witnessed in the December elections.

Vladimir Putin has reiterated his support for Alexander Lukashenko’s government in Belarus in the face of EU sanctions.  The President has appointed Police Major-General Anatoly Yakunin as the new chief of the Interior Ministry’s Main Directorate for Moscow.

Russian baritone and People’s Artist Eduard Khil, who scored of viral hit with wordless warble ‘I Am So Happy to Finally Be Back Home’, has died in a St. Petersburg hospital at the age of 77.

PHOTO: President Putin stands with a family awarded with the Order of Parental Glory at a Kremlin ceremony Saturday, June 2, 2012 (Kremlin.ru)