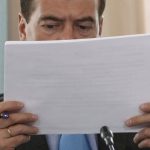 A sanctioned opposition rally in St Petersburg on Saturday was attended by between 1000 and 2000 people, depending on the source.  Police detained more than ten people who tried to march down the city’s main avenue following the rally.  A man dressed up in a penguin costume was also detained; the offending bird apparently belonged to a pro-Kremlin faction.  In Moscow, Left front leader Sergei Udaltsov and People’s Freedom Party co-founder Boris Nemtsov gathered with around 250 other opposition leaders and supporters to present their new plans for further government-critical rallies.  Nemtsov told the press that he anticipated that Putin’s inauguration day would be marked with the pardoning of a number of famous inmates.  The New York Times reports on how state-run NTV raised the ire of the protest movement.  Patriarch Kirill has made his first public comment on the Pussy Riot affair, decrying the band for desecrating the church where they performed their anti-Putin anthem.  The memoirs of the Interior Minister of Tatarstan, where a man died last week from injuries allegedly sustained at the hands of the police, are under scrutiny for their justification of the use of torture.  A police sergeant in Moscow is facing murder charges after fatally shooting a man in a road rage incident.

A Leningrad region journalist may face extremism charges after editing an address by Prime Minister Vladimir Putin to make him sound critical of the government.  It has been announced that Moscow region governor Boris Gromov will step down once his term ends in May.  The Russian banker shot five times in London’s financial district was apparently due to give evidence to an investigation into the attempted murder of a former business associate Alexander Antonov, in 2009.

See here a video from U.N.-Arab League envoy Kofi Annan’s Moscow meeting with President Medvedev, designed to solidify efforts to put an end to the violence in Syria.  ‘This may be the last chance for Syria to avoid a long-lasting and bloody civil war’ said the outgoing Russian president.  Following Medvedev’s meeting with US President Barack Obama, during which, the Washington Post says, the pair acknowledged ‘continued tensions’ over missile defense and Syria, President Medvedev nonetheless praised the reset era as ‘the best three years in the history of Russia-U.S. relations over the past decade’.

On efforts to redress the decline of Russia’s higher education system.