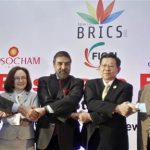 The young son and parents of an alleged member of punk rock group Pussy Riot have received death threats, says a lawyer for one of the participants in the band.  Moscow City Court has ruled that the pre-trial detention of a third suspected member of the group, Yekaterina Samutsevich, is legal.  Bloomberg’s Leonid Bershidsky discusses the extent of Patriarch Kirill’s political power and its implications for the detained members of the band – namely that they are unlikely to find the courts sympathetic.  Yulia Latynina has written a particularly biting op-ed on a recent example of Kirill’s sway over the judiciary.  The Moscow Times reports on an unorthodox method of ensuring paratroopers remain devout.  Opposition journalist Oleg Kashin argues that ‘[n]othing will threaten Putin’s regime until the millions of Russians who make their living in the kickback economy recognize that the costs outweigh the benefits’ in an editorial for Bloomberg.  The Washington Post examines how members of the protest movement are using local council positions as a vehicle for change.  The State Duma has approved legislation designed to simplify the registration of political parties, apparently in response to the protest movement.

According to RFE/RL, two former police officers in Siberia’s Kemerovo Oblast have apparently been charged with abuse of power and violent conduct that resulted in the death of a detainee.  ‘The police are allowed to kill people with impunity’, says the mother of a 27-year-old victim of police brutality, in the New York Times.  As part of a probe into alleged abuse of power, investigators have searched the apartment and dacha of former St. Petersburg police chief Mikhail Sukhodolsky.  Releasing jailed oligarch Mikhail Khordokovsky would have ‘a bullish effect’ on the stock market, but are financial gains really enough to motivate his release?

Russia has called on Syria’s opposition to accept a peace plan put forward by U.N.-Arab League special envoy Kofi Annan.  Jaroslaw Kaczynski, the twin brother of the Polish President who died in a 2010 plane crash in Russia, has made claims that the accident is likely to have been an assassination.  Two separate passenger jets have been grounded by engine failure, one of them the same model of aircraft in which the Yaroslav Lokomotiv hockey team died last year.  Following Mitt Romney’s controversial comments on Russian foedom, the Washington Post presents a number of graphs charting Americans’ perception of Russia.

Hold the front page – Medvedev’s cat is safe!  For more sarcasm on the whereabouts of the president’s pet, see here.