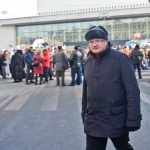 ‘I respect press right to go anywhere & ask any question. But do they have a right to read my email and listen to my phone?‘  US Ambassador to Russia, Michael McFaul, lambastes state-run NTV for hounding him, via Twitter.  ‘When I asked these ‘reporters’ how they knew my schedule, I got no answer.’  A US State Department spokesman has downplayed the ambassador’s reaction, arguing that McFaul was simply ‘raising a rhetorical question.’  Four more police officers in Siberia’s Kemerovo Oblast have been arrested and charged with abuse of power and violent conduct, for their alleged involvement in the torture of a suspect with a gas mask, which resulted in the detainee’s death.  A controversial bill that would introduce fines of up to 1 million rubles for the alleged ‘spreading of homosexual propaganda’ has been submitted to the State Duma.  The legislation was submitted by lawmakers from the central Novosibirsk region who have decried what they view as the normalization of homosexuality by the media.  The author of the St. Petersburg law on the same issue, Vitaly Milonov, has defended it, as an Orthodox believer, in an interview with the Moscow Times.

The new board of directors of Ekho Moskvy radio station, which was subject to a purge by Putin prior to the elections for criticizing the Kremlin, does not features a single journalist, says ITAR-TASS.  Since rules to simplify the registration of political parties were submitted to the duma, a total of 85 organizations have applied to the Justice Ministry.  Among the parties is a new alliance of prominent nationalists, united as the National Democratic Party.  According to Ria-Novosti, the unregistered opposition party Parnas has announced it will not take part in a meeting with outgoing President Dmitry Medvedev next week.

The Moscow Times looks at why Pavel Ivlev, a former lawyer for the family of first deputy prime minister Igor Shuvalov, may have spilled the beans of Shuvalov’s alleged dubious business dealings.  According to a State Duma source, Emergency Situations Minister Sergei Shoigu is apparently the favorite to replace Boris Gromov as the governor of the Moscow region.  This report considers the candidates for Yaroslavl’s mayoral runoff election on Sunday.

Vladimir Putin would apparently like to bring back Soviet-style awards for best blue collar workers, among the categories: best welder and best stone best heavy vehicle driver.  Interior Minister Rashid Nurgaliyev has told the Federation Council that Soviet cartoons should be brought back to help nurture the moral fiber of Russia’s children.  Twin sisters from Vladimir Oblast have raised serious questions about the teaching of history in Russia, following an appearance on a game show in which they expressed their belief that the Holocaust was some sort of ‘bug repellent’.