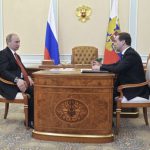 RFE/RL reports that a Moscow court has declared the Occupy Abay street camp illegal, providing the police with justification to dismantle it.  Apparently more than 20 people have been detained as law enforcement swept in on the encampment.  The Moscow Times reports on what the dispersed protestors plan to do next.  The most important development following the peaceful writer’s walk in Moscow on Sunday is that ‘whatever decision the authorities make, it will work against them’, says test march participant Yulia Latynina.  ‘[T]he regime is threatened by peaceful rallies with clearly defined political demands, where organizers maintain order and hand over provocateurs to the police’.  Not all commentators support these tactics; Lev Gudkov of the Levada Centre warns the Economist that actions like the test stroll ‘risk miring the opposition in a sort of “political infantilism.”   Andrew Ryvkin in the Guardian is another such naysayer.

Left front champion Sergei Udaltsov has been released from hospital ostensibly in order to face trial in Ulyanovsk over accusations of assaulting a journalist.  Russia (along with Moldova) apparently has the worst ranking of all 49 European countries for discrimination based on sexual orientation, according to the latest ILGA Europe review.  Another detainee has apparently died in police custody in the republic of Tatarstan.  The European Court of Human Rights has, for the first time, found the Russian government culpable in the death of a solider, awarding significant damages to the mother of a conscript who died after being shot by a fellow soldier.

US President Barack Obama will not attend this year’s APEC summit in Vladivistock in what some have suggested is a tit-for-tat gesture over Putin’s refusal to attend the G8.  United Russia Duma Deputy Andrei Klimov disagrees and says politicians should desist from perceiving the move as a response to Putin’s move.  Senior United Russia deputy Alexei Pushkov believes that Putin’s decision on G8 is very much a sign of displeasure with Washington.

Prime Minister Dmitry Medvedev has teased Russia watchers by proposing the new Cabinet to President Vladimir Putin, but keeping details firmly under wraps.  Patriarch Kirill has attempted to update his image by creating his own Facebook page.