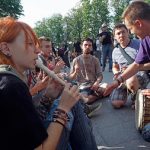 The opening of two modern art exhibitions curated by Marat Guelman have apparently been besieged by scores of radical traditionalists led by an Orthodox Christian priest who believe the works shown to be blasphemous, despite high-ranking Orthodox official Vsevolod Chaplin seeing ‘nothing unholy’ in the exhibits.  Police in Moscow have detained opposition leader Ilya Yashin and at least 16 other anti-Putin activists as they continue their marathon protest on Kudrinskaya Square following their ejection from the ‘Occupy Abay’ Chistye Prudi site.  It has also been reported that around 1,500 opposition supporters have gathered in the Barrikadnaya station area.  Opposition activist Aleksei Sakyerto has told RFE/RL that police were rough when removing protestors from Kudrinskaya Square.  ‘What had been a mood inclined toward peaceful action turned to bitterness and anger’, says the Washington Post.   Ilya Yashin has called the Occupy Abay camp ‘a big victory, because it forced authorities to behave decently, observe rules, even turn to the court for a decision to remove it’.  This columnist argues that the value of the Occupy movement is limited as long as Russia’s regions are uninspired.  Bloomberg wonders whether Sunday’s test stroll, ‘was a spectacular success or a baffling failure’.  Ria-Novosti reports on a new legislative weapon against the protest movement.

The Other Russia features a new video explaining the details and necessity of proposed Sergei Magnitsky sanctions.  A trial has begun against a St Petersburg teacher on charges of damaging the reputation of an education official after she went public with claims she was exhorted to vote for Vladimir Putin.  Brian Whitmore assesses rumors that power vertical mastermind Vladislav Surkov might be heading for a comeback as a deputy PM.

Russia’s Soyuz spacecraft has successfully docked with the International Space Station.  The US is apparently willing to consider Russia’s request for allowing convicted arms dealer Viktor Bout to service his prison term at home.  The New York Times reports that the Sukhoi Superjet 100 which crashed last week in Indonesia was a back-up model; the black box of the fallen jet has now been retrieved.

PHOTO: Russian youth opposition protesters, evicted by police from a protest camp at Chistiye Prudy, relax at a new site chosen for their camp in downtown Moscow, Wednesday, May 16. (Misha Japaridze/AP)