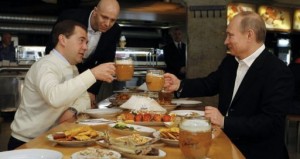 At least 17 people from a group of LGBT activists have been arrested in St Petersburg for breaching the law on spreading ‘gay propaganda’ by attempting to unfurl banners defending their rights on May Day.  Police have arrested 22 people at an opposition rally called Left March on Moscow’s Trubnaya Ploshchad which attracted 500 people.  In the first appearance at a May Day parade by a Russian leader since Yeltsin in 1996, Vladimir Putin and Dmitry Medvedev ‘attempted to burnish their image as champions of the working class’, says the Telegraph.  The tandem supping on a quick pint in a popular fast food establishment after the parade provided the photo opportunity of the day.  The Moscow Times’ report from the May Day rally suggests little unity amongst the crowd who manifested a certain amount of indifference.  ‘A man holding one side of a banner that read, “Development and Progress for Moscow,” admitted he did not know exactly what the banner said or what it represented’, says the Global Post, which implies rent-a-crowds may have ramped up the number of attendees.

The last meeting of President Dmitry Medvedev’s human rights council has apparently been characterized by dismay at its failure to push through reforms over the past three years.  China and Russia have voiced their opposition to Western demands for the U.N. Security Council to threaten Sudan and South Sudan with sanctions if the two states do not act to curb a looming conflict.  Mark Adomanis from Forbes explains here why he believes that ‘Russian opposition to sanctions in Sudan is not purely a self-interested act or ploy, but actually reflects a comprehensive understanding of diplomacy and statecraft, one very different from our own’.