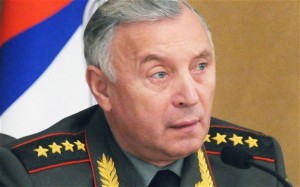 Russian Chief of General Staff Nikolai Makarov has caused a stir by announcing at the missile defense conference currently underway in Moscow that the state does not exclude preemptive use of weapons against NATO’s missile defense systems in Europe, though this would only be a last resort.  NATO Secretary-General Anders Fogh Rasmussen is apparently optimist that an agreement can still be reached with the Kremlin on the plans, though Russian Defense Minister Anatoly Serdyukov has apparently said negotiations with the US over the proposed shield are near a ‘dead end’.  Russia has no intention of pulling out of the Intermediate Range Nuclear Forces Treaty in response to a European missile defense system.  President-elect Vladimir Putin believes that the West would be wrong to boycott the European soccer championships held in Ukraine over the treatment of jailed opposition politician Yulia Tymoshenko.  He has told the press that Russia would be willing to take the jailed former Prime Minister in for medical treatment, an offer speedily rebuffed by Kiev.  Russian has pledged that it will retaliate against U.S. ‘attempts to interfere in our domestic affairs’ by way of Magnitksy sanctions, if passed.

After some heel dragging, Moscow city authorities have agreed to permit the May 6 March of Millions protest, but in an apparent snub to its title, only 5,000 will be permitted.  Two of the incarcerated members of Pussy Riot have been reprimanded in prison, one for ‘improper bed making‘.  Police have begun investigations into an attack on three journalists for liberal newspaper Novaya Gazeta in the city of Ryazan.  Reuters contemplates the political climate Vladimir Putin will return to as President.  Vladimir Ryzhkov offer five reasons why Putin’s reign cannot last in the Moscow Times.  Blogger Ilya Varlamov has bowed out of the mayoral election race in the city of Omsk due to failure to collect the necessary 10,000 signatures.

President Medvedev has established two new state decorations and awarded reviled Central Election Commission chief Vladimir Churov with the Order of Alexander Nevsky.  The soon to be Prime Minister has signed the Federal Law on Ratification of UN Convention on the Rights of Persons with Disabilities.  ‘[D]eeply, deeply damaged goods’ is how one expert describes Putin’s tandem partner in this analysis of his political future.

A Levada Center poll has revealed that only 2% of people believe that officials disclose all sources of income in their legally required declarations.  The Moscow Times reports on a migration amnesty law currently being drawn up that could allow as many as 5 million illegal immigrants to become nationalized Russian citizens.

Respected Russian political journalist Mark Deutsch has died in an accident in Indonesia.

PHOTO: General Nikolai Makarov has threatened to target NATO bases hosting an anti-missile system designed by the US to protect European allies against attack from states such as Iran.  (AFP)