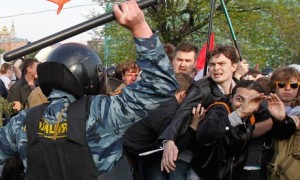 Yesterday’s opposition March of a Million rally in Moscow, which attracted between 30,000 and 120,000 people, descended into violence and resulted in the arrests of opposition leaders Sergei Udaltsov, Aleksei Navalny and Boris Nemtsov.  Figures for the number of protestors detained at the protest (held on the eve of Putin’s inauguration) vary from 250, to 400, to 600.   The Independent reports that at least six people were taken to hospital during the rally which saw police use tear gas as ralliers broke through police cordons.  According to Ria-Novosti, a total of 29 police officers were injured.  RFE/RL has video footage of the clashes.  “Putin has shown his true face, how he ‘loves’ his people – with police force,” a computer analyst who took part in the protest told Reuters.  The President elect’s spokesman, Dmitry Peskov, meanwhile told TV station Dozhd: ‘From my point of view, the police acted softly. I’d rather they behave more harshly.’  The Moscow Times notes a ‘shift in atmosphere’ from previous demonstrations with a ‘higher concentration of aggressive and radical demonstrators in the crowd than at previous opposition events’.  The Washington Post suggests the change reflects the growing ‘sense of anger and impotence’.  Ria-Novosti concurs that Putin is facing hitherto inexperienced levels of distrust.

Vladimir Putin is apparently ready to fully support the development of ties between Russia and the US, provided that the relationship is equal.  On his last full day in office, President Medvedev dismissed the head of Russia’s problematic navy and named a new air force chief.

Today is of course Putin’s inauguration ceremony as President: follow the Moscow Times’ dedicated live blog for minute-by-minute updates.  His supporters were not entirely absent yesterday, holding a rally at the Poklonnaya Gora memorial at the same time to mark the first anniversary of the creation of his Peoples Front public movement.

PHOTO: Russian riot police scuffle with protesters during the ‘March of Millions’ in Moscow against Vladimir Putin on the eve of his return to the presidency, May 6, 2012  (Denis Sinyakov/Reuters)