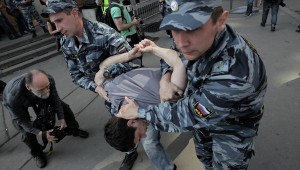 Vladimir Putin has been inaugurated in his third term as President at a ceremony (which can be viewed here) attended by 3,000 guests, among them Silvio Berlusconi, Patriarch Kirill and Mikhail Prokhorov.  The appearance of his media-shy wife Lyudmila was noted with surprise by the Guardian, who add that she ‘grimaced throughout’.  Putin himself looked ‘grave — and at times burdened’, says the New York Times of the relatively solemn event.  In his five-minute address, using heavily patriotic imagery, the President emphasized the importance of unity, and the necessity of strengthening ‘Russian democracy, constitutional rights and freedoms […] We want to, and we will, live in a democratic country‘.  Meanwhile, police reported that they detained 120 people in downtown Moscow as around 200 demonstrators wearing white ribbons gathered in protest as the ceremony began.  Ria-Novosti places the number of arrested at 300.  Opposition figureheads Alexei Navalny and Sergei Udaltsov, who were fined and then released after their arrest on Sunday, were detained once more this morning after an all-night protest at the Kitai-Gorod metro station where around 200 people spent the night and were later dispersed.

Reflecting on Sunday’s March of a Million anti-Putin protests, the Other Russia argues that an illegal police presence served to ‘provoke conflict’.   The Moscow Times reports on the police raids and round-ups which characterized the day.  Interior Minister Rashid Nurgaliyev has apparently told the press that the rallies were ‘intended for the West alone.’   The Investigative Committee plans to launch an inquiry into the reported attacks on police during the protests, which could carry a sentence of up to ten years.

Masha Lipman sees in the ongoing protest movement evidence that Putin’s return will continue to be contested.   ‘You can disperse a protest once, you can disperse it twice, but at some point so many people will come out on to the streets that they won’t have enough buses or police stations to deal with everyone’: said Sergei Udaltsov, quoted in the Independent.  Find out here why Brian Whitmore calls the new President ‘the man without a plan’.

Putin has officially nominated former president Dmitry Medvedev for the post of Prime Minister.  ‘Thanks to everyone for their support over the past four years as President of Russia. Our dialogue will continue. There is much work ahead’ read the junior tandem partner’s final Tweet as President.