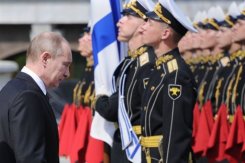 Moscow police have detained about thirty participants of an unsanctioned peaceful protest against Putin’s return to the presidency in downtown Moscow, bringing the total number of people arrested since May 6, to around 750 people.  Anti-corruption blogger Alexei Navalny was released today and then promptly re-arrested.   Whilst protestors continue to roam the capital’s streets, ‘Putin and his people showed little inclination to engage them with anything but contempt’, says the Washington Post.  ‘The Kremlin’s senseless crackdown is the opposition’s best recruiting tool‘: Garry Kasparov gives his views in the Other Russia.   The US State Department has issued a statement saying Washington is ‘troubled’ by reports of the turbulence in Moscow.  Human Rights Watch has also urged the Russian authorities to ‘promptly and effectively investigate reports of excessive use of force against protesters and arbitrary detentions’ over the past three days.  The Telegraph wonders whether the crackdown will spell the end of Putinism.

Dmitry Medvedev has been approved as Prime Minister by a vote of 299-144.  Described by some analysts as a comfortable win, the Moscow Times suggests on the contrary that it was a disappointing result, as the President had hoped for two-thirds.  At the parliamentary session Putin apparently hit back at challenging questions from Communists and leftists in customary acerbic fashion.  Lilit Gevorgyan, an analyst at IHS Global Insight offers her take on how Medvedev will fare as Prime Minister on the BBC.

Vladimir Putin has celebrated his return to the Presidency with a display of sporting showmanship, pictures of which can be seen here.  This would seem to support Julia Ioffe’s views on the President’s trajectory: ‘Putin, with his diving for ancient urns and shooting tigers for the public’s adoring gaze, seems bent on comic, sinister ossification, perhaps à la Qaddafi’.

The UK’s Foreign and Commonwealth office has found a number of violations in Russia in its 2011 Human Rights and Democracy report, complains which have been rebuffed by the Kremlin as ‘not impartial and open minded’.  Today is Victory Day, marking the 67th anniversary of the end of World War Two, to be celebrated by a major military display in Moscow.  Ria-Novosti is broadcasting live from the events.

PHOTO: Russian President Vladimir Putin walks between soldiers at the Tomb of the Unknown Soldier in Moscow on May 8, 2012 in commemoration for those killed during WWII.  (France 24)