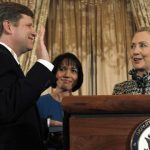 The European Court of Human Rights has expressed serious concern over the ‘inhumane and degrading treatment’ of remand detainees in Russia, whose number, the court insists, must be reduced.  Communist Party leader Gennady Zyuganov has told the media that should he be elected president, he would pardon former Yukos head Mikhail Khodorkovsky.  The jailed tycoon has said that the ECHR finding no evidence that the case against him was politically motivated reflects the court making ‘forced concessions to the Russian authorities’.  British MP Denis MacShane has called for the UK to take a stand on Moscow’s dubious human rights record by banning a number of Russian officials from attending the 2012 Olympics in London.  ‘[W]e must enact systemic changes that will uncoil the serpent of corruption that is suffocating our development‘: presidential candidate Mikhail Prokhorov has penned an op-ed in the Guardian with his vision of Russia’s future.  ‘The comments are likely to provoke a mixture of scorn and sympathy because Prokhorov’s candidacy is widely seen as a Kremlin project to leach votes from harsher opponents, whatever his own intentions or democratic leanings’ says the same newspaper’s Tom Parfitt.  Ahead of the elections, Prime Minister Vladimir Putin will apparently not take part in televised debates with other candidates.  The immutability of Putin’s character presents a ‘huge dilemma’ for his coterie, says Nikolai Petrov in the Moscow Times.

Ria-Novosti reports that a criminal case has been opened into ballot rigging in the Central Russian city of Vladimir where about 6,000 ‘dead souls’ seem to have voted in the December 4 parliamentary elections.  Following pledges by Putin to enhance transparency in the voting process, the installation of webcams at ballot stations has reportedly begun.  The Kremlin is, according to this article, attempting to make rallying harder with new permit rules.  Following a series of criticisms from the Prime Minister over rising prices for hot water in Kirov region, its Governor, former opposition figure Nikita Belykh, has launched a searing attack on Putin.

Deputy Foreign Minister Sergei Ryabkov has praised the US’ new ambassador to Russia as someone who, in his former roles as Special Assistant to the President and Senior Director for Russia, encouraged a positive trend in bilateral relations.  Russia has apparently suggested that NATO is contemplating a Libya-style intervention in Syria, with the introduction of a no-fly zone.

President Medvedev has expressed his grief over the death, aged 87, of ‘legendary’ intelligence officer Gevork Vartanyan who was believed to have thwarted a Nazi plan to assassinate Churchill, Roosevelt and Stalin in Tehran in 1943.