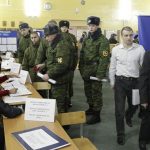 Vladimir Putin has launched his online manifesto, at putin2o12.ru, for the March 2012 elections with pledges to introduce reforms, among them promises to end police repression and improve the accountability of the government.  The online manifesto was apparently greeted by a barrage of negative comments, which were rated as the site’s most popular, and were subsequently removed.  According to Ria-Novosti, Putin’s spokesman Dmitry Peskov denied reports that critical comments were being eradicated and suggested that the site had frozen.   A claim difficult to support, when one blogger, according to the NY Times, apparently discovered a way to access comments that had been submitted but not published.  The Prime Minster’s cyber-problems reflect the general ineptitude of the regime when it comes to strategically using the Internet, argues Brian Whitmore.  Peskov has attempted to distance Putin from the online campaign, suggesting the web-phobic PM will in due time present his own presidential election program, which will differ from the program currently presented, which was, he claims, a United Russia project.  The Washington Post reports, however, that the site was created under a contract with the Putin campaign.  Putin has pledged that, if he becomes President, governors who allow an increase in utility bills will be fired.  The regional utilities chief in Bryansk has been sacked following the death of a toddler in a sidewalk accident.

An OSCE report has found that the December 4 State Duma elections failed to meet democratic standards and were riddled with violations.  RFE/RL reports on how opposition movement Solidarity has apparently initiated a series of single-person protests in front of former voting stations in St. Petersburg to highlight the problem of electoral fraud.   From the Moscow Times, more evidence has come in to suggest that the presidential candidacy of Irkutsk Governor Dmitry Mezentsev is an act of Kremlin puppetry.  Alexei Navalny’s lawsuit against a VTB Group daughter company which he alleges participated in money laundering has reached another stumbling block.  Why presidential candidates are playing the Khodorkovsky card.  Former finance minister Alexei Kudrin has claimed he is in talks with the opposition on forming a new party.

It has been reported that a Russian-owned ship allegedly carrying weapons to Syria has docked in Tartus despite assurances it would change destination.  The Guardian also reports that a Russian ship carrying 60 tonnes of arms for Damascus was stopped in Cyprus.  Nikolai Patrushev, who heads the Kremlin’s Security Council, has voiced concerns that Israel will pressurize the United States into a military conflict with Iran.  Find out here why US Undersecretary of State for Arms Control Ellen Tauscher believes that an agreement on missile defense- ‘the metaphor for the opportunity of getting things right’– will be concluded this year.

Russia has accused the British MP who suggested Vladimir Putin being barred from the London Olympics of acting out of personal interest.   Russia’s Olympic Committee leader apparently hopes that the London Olympics can help improve complex bilateral relations with Britain.

PHOTO: A view of a polling station in Moscow during the December State Duma vote. The OSCE criticized the vote. (Igor Tabakov / MT)