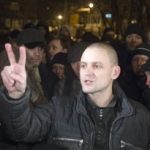 Sergei Udaltsov, leader of the Left Front opposition movement, has been released from jail after 25 days of detention.  Udaltsov, who has been on hunger strike during his incarceration, was greeted by a crowd of about 100 supporters upon his exit from jail, to whom he vowed renewed action: ‘I’m calling on all of you not to ease up.  We will prepare new actions of civic peaceful protest. Without question we will go out on Feb. 4 and there will be other events’.  ‘What gets people about corruption — and what gets them out into the streets — is the humiliation of living with a government that is profoundly corrupt’, says NY Times writer Masha Gessen, who hopes that the holidays will not stymie the momentum of the movement.  Professor Jeffrey Sachs praises Mikhail Gorbachev and laments the threat to democracy in Russia in an interview with Bloomberg.  Freedom House staff editor, Tyler Roylance, has criticized Russia’s report on human rights abuses in foreign countries as a pretext for the Kremlin to criticize its adversaries rather than a sincere examination of human rights.

Following the shooting of a young Moldovan by Russian border guards on New Years Day, Moldova has urged Russia to demilitarize its peacekeeping mission in the breakaway region of Transdniester in favor of a civil mission with an international mandate.

Two solicitors from Carter-Ruck, who represented exiled tycoon Boris Berezovsky in his libel case against Vladimir Terluk, explain how the ‘fascinating’ case played out in the Guardian.  The number of Internet users in Russia may reach 90 million in 2013, according to the Minister of Communications, Igor Shchegolev, after Russia surpassed Germany in internet use in 2011.
January 15 is the day when we can apparently expect fragments of the failed Phobos-Grunt probe to fall to earth.

PHOTO: Russian opposition leader Sergei Udaltsov shows a V sign after he was released from a detention center in Moscow, Russia, Wednesday, Jan. 4, 2012. Udaltsov, whose jailing became a rallying point for the Russian opposition, has been freed after a month in custody.  (Misha Japaridze / Associated Press )