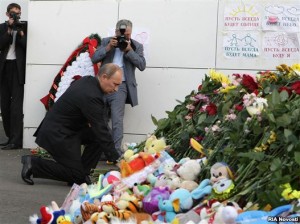 Today marks the two-year anniversary of the slaying of rights activist Natalya Estemirova: the findings of an independent investigation into her murder led by Memorial, Novaya Gazeta and the International Federation for Human Rights have concluded that that the secret services have obfuscated the truth and protected the rights worker’s killers.  Ria-Novosti reports that police have ‘repeatedly refused’ to allow the murdered activist’s sister access to key case materials.  In addition to this, the report finds that DNA evidence demonstrates that the two men charged with the assassination did not commit the crime.   From breast-baring to clapping, Ellen Barry in the New York Times considers some of the innovative new protest methods employed by activists in post-Soviet states.   A major Russian publisher has accused the authorities of confiscating copies of business weekly Kommersant Vlast after its July 4 edition mocked St. Petersburg’s outgoing governor, Valentina Matviyenko, over her failure to deal with the city’s deadly iceberg problem. As 16 people remain missing, Vladimir Putin has blamed ‘irresponsibility and greed’ for the Bulgaria sinking on a visit to shores of the Volga river.  Only 28% of passengers were saved, while 69% of the crew survived, reveals RFE/RL, another factor which has come under scrutiny in a disaster which has flagged up Russia’s numerous problems with superannuated infrastructure.  The driver of a hydrofoil in the Altai Republic, that sank on July 11, leaving 4 people missing, has been taken into custody.

President Medvedev suggests that the attraction of a civil service career for young people is a reflection of its propensity for corruption.  The former top finance official for the Moscow region has been arrested in absentia for embezzling $135 million from the regional administration.  Russia’s Constitutional Court has reopened the notorious case of two women who were killed in a road accident last year involving the vice-president of oil giant LUKoil. Vladimir Putin has called upon ministers to donate one month’s salary each to pay for a statue of Pyotr Stolypin, Prime Minister from 1906 to 1911, who was known for his ruthless methods in combating revolutionaries.  A university will also be renamed after the politician whose reputation was so formidable the hangman’s noose became known as ‘Stolypin’s necktie’.  –

The Guardian considers how the distinctly uncharitable Federation Foundation managed to attract a slew of celebrities to an event which yielded no funds for those it purported to help.  London welcomes a statue of the world’s first man in space, Russian cosmonaut Yury Gagarin.  In a move which many have complained will see ecological despoliation and displacement of people, Russian officials have announced plans to more than double Moscow’s territory.