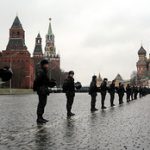 Of late the Kremlin has shown an untypically lackadaisical attitude towards public marches, which, in months past, would have been swept away with draconian efficiency within a matter of moments by armed police officers.  It was noted that on December 30 a rally for Left Front leader Sergei Udaltsov attended by hundreds came to pass peacefully, despite having no sanction.  It seems that perhaps while the authorities attempt to rethink their strategy in view of the critical mass, clemency towards public rallies has been a temporary concession.  Just in from the Wall Street Journal however is evidence that suppression by stealth may be the new tactic:

The Kremlin is tightening control over permits for rallies next to its walls, as the opposition plans a campaign of antigovernment protests around the March presidential elections.

“It looks like they are afraid of some kind of a storming of the Kremlin, which is a pure paranoia,” said Dmitry Butrin, a journalist who is one of the organizers of the demonstrations. A Kremlin spokesman said it was just a routine change aimed at making the rules more consistent. He denied it was related to the demonstrations or an effort to prevent rallies in the area.

The Presidential Press Service announced the changes to the decree governing the Kremlin at its surroundings on Jan. 4, when Russia was shut down for its weeklong New Year’s holiday. Under the new rules, permission from the presidential administration will be necessary for any public event on Vasilievsky Spusk, the cobblestone expanse along the Kremlin wall behind St. Basil’s Cathedral on Red Square.