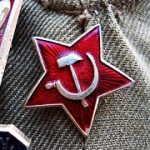 Today an article from Deutsche Welle suggested that Russia’s Communist Party is poised to make considerable progress in the upcoming elections.  The party is apparently on course to gain as much as 17% of the vote, which would render it the second largest force in the Duma.  It seems that someone in the ruling elite might have also recognized the potential threat: the news broke today that a truckload of the party’s literature had been seized, a classic tactic used to derail opposition parties.  Certainly the party’s brand of Soviet nostalgia holds some sway over the popular imagination, as evinced by the turnout at today’s reenactment of the 1941 Soviet parade.  Some commentators hold no truck with the idea that the party is anything but an anachronism. Mark Adomanis of Forbes strongly repudiates the notion of the Communists as a party for the future:

I’ve heard from some commenters, in particular Sean Guillory of the always excellent Sean’s Russia Blog, that the KPRF is actually modernizing and that its regional offices are increasingly populated with and run by recent university graduates repelled by United Russia’s cronyism and corruption. I sincerely hope that is the case since a Communist party that is in some contact with reality is better than one that is out in cloud cuckoo land. But I have a very hard time believing that an organization that is run by a farcical dinosaur like Zyuganov, and that puts out such laughably tone-deaf pronouncements, can be any sort of progressive force.

So, in closing, while I hope that the KPRF will someday become a more modern political party, its current leadership is mired in an anachronistic and ignorant worldview that is, at a very basic level, deeply regressive and reactionary.