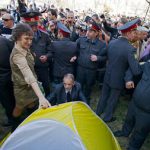 Astrakhan.  Back in February we blogged about the difficulties of fostering support for the opposition movement in the Southern oil and gas town.  This week headlines have spoken of the Volga city ‘electrifying’ the opposition, becoming a new battleground in the fight against election fraud and the ills of Putin’s power vertical, thanks to a hunger strike from thwarted mayoral candidate Oleg Shein.  Many have been quick to claim that the sudden explosion of anti-Kremlin activity has more to do with the Muscovites who have descended upon the city (among them Alexei Navalny, Ilya Yashin and Sergei Mironov) than native Astrakhanians. Michael Birnbau in the Washington Post says that ‘few residents knew of Shein’s accusations or his struggle even as opposition circles in Moscow watched with increasing concern, stoked by his day-by-day entries on a blog that is little-read locally’.  Astrakhan’s governor, Alexander Zhilikin, has responded to the arrival of Navalny et al with a “get off my land” style repartee, treading the familiar path used by regional politicians via which they suggest that the capital’s citizens fail to appreciate the nuances or needs of life in a smaller city.  Whilst it would not difficult to believe that locals are ambivalent or disinterested in the events, the importance of this as another building block in the regional resistance to the Putin regime, in which Tolyatti are Yaroslavl are already components cannot be underplayed.  Yesterday the Power Vertical’s Brian Whitmore penned an article on Muscovite Ilya Varlamov, who plans to compete in primaries to choose an opposition candidate for the mayoral elections in the Siberian town of Omsk.  Varlamov explains how as an outsider, the idea seemed  ‘totally absurd. I was only in Omsk once in my whole life. I was born and lived my whole life in Moscow’.  But as Whitmore goes on to explain, local or not, what Russia’s opposition needs, more than anything, is responsible and active candidates:

‘[…] the experiment in Omsk takes things to a whole new level. All of the candidates participating in the primaries — and there are 24 of them — have signed a pledge to back the winner in this summer’s election. Organizers say the primary will boost public interest in the election campaign and serve as a way to introduce the eventual opposition candidate to the public.

‘“Why shouldn’t we, the active citizens, promote a really independent modern candidate? A person, capable of responsibly representing the interests of all of the city’s social classes — most of all, the active citizens of Omsk; a person capable of seriously improving the social climate in the region,” Citizen-Mayor activist Viktor Korb told Ria-Novosti.’