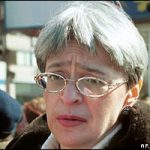 Today marks the fifth anniversary of the murder of Anna Politkovskaya, the investigative journalist recognized and ultimately punished for her fearless reporting on the Chechen conflict.  Amnesty International has a report on the lack of progress made in protecting freedom of speech in Russia since the Novaya Gazeta reporter’s assassination.  The whole report, which makes for sobering reading, can be downloaded from the Amnesty International website here.

Here is a statement from the charity’s Europe and Central Asia Deputy Director John Dalhuisen:

In Russia, journalists, human rights defenders and civil society activists are targeted and often murdered because of their work. This cannot be tolerated. Attacks are not being fully and impartially investigated and perpetrators are not being brought to justice.

Unless and until such critical voices receive the recognition and protection they need – and are entitled to – Russia will not get the civil society it needs. In its place, corruption, the abuse of power and human rights violations will continue to flourish.

“Strong international support for and solidarity with civil society in Russia will be vital if we are to help change the climate of impunity and encourage positive changes.