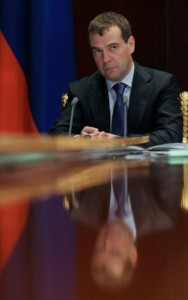 Nothing like a war to bring out a bit of rivalry, even if you’re both ostensibly on the same side.  Yesterday marked the anniversary of the start of the five-day war with Georgia in 2008 which resulted in the independence (in Russia’s eyes) of Abkhazia and South Ossetia and the almost total freeze of diplomatic relations between Tsbili and Moscow. As such, observers are marking the occasion by ruminating over the ashes of the conflict.  A new documentary called ‘The Lost Day’, broadcast on the Internet, has apparently raised some questions about then President Medvedev’s role in establishing a clear plan of action. He insists that there was not a tremble of prevarication in his response to the Georgian assault on South Ossetia and that the tanks were already rolling once he finally spoke talked to Putin.

The generals interviewed on the documentary would beg to differ, suggesting Medvedev’s comportment in extremis was rather more sappy.  Putin, it would seem, also disagrees, asserting that he called his tandem partner twice the night on the eve of the war.  Whilst the military, politicians and historians may produce countless interpretations of the events of that night, it seems the only concrete fact to emerge is that if the Medvedev presidency felt hollow at the time, revisiting its major events only seems to reinforce its emptiness.