Rogozin’s Idea Of A “United” Russia 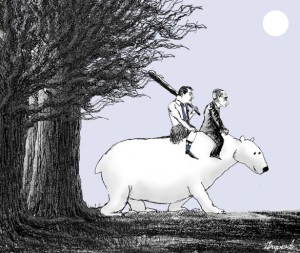 Dmitry Rogozin has never shied away from inflammatory statements.  As Russia’s envoy to NATO, though tucked away in a neutral corner of Brussels, he frequently made headlines, whether branding Republican senators ‘monsters‘, lambasting Western intervention in the Arab Spring, or accusing NATO of plotting against Russia in a wildly conspiratorial fashion.  Prior to his stint in the heart of the EU, Rogozin had gained notoriety in Russia for his unabashed demogogy on the issue of nationalism, spearheading the anti-immigration Rodina campaign.  It was reported earlier this week that for the upcoming elections, Rogozin has thrown his support firmly behind Vladimir Putin’s United Russia, which, in the face of faltering popularity ratings is looking to reconnect with the demos by any means available to it.  Michael Bohm in the Moscow Times has an insightful piece on why Putin’s party could stand to lose from embracing Rogozin’s particularly pernicious brand of chauvinism.  Here’s an extract which reveals just how unsavory the politics of Rodina’s leader are:

The Kremlin first played the Rogozin card in 2003, when it helped his original Rodina party get 9.2 percent of the vote in the State Duma elections. But two ugly incidents caused a rift between Rogozin and Putin. First, in January 2005, 14 Rodina members signed a petition to the Prosecutor General’s Office to outlaw all Jewish organizations in Russia, claiming that “the world today is under the monetary and political control of international Judaism.” The petition was released on the same day that Putin went to Poland to commemorate the 60th anniversary of the liberation of Auschwitz. (Rogozin was not one of the signatories, but he refused to condemn the Rodina members who signed the letter, saying they did it in an individual capacity only.) Then, in November 2005, Rodina placed an openly xenophobic political advertisement on television titled “Clean Up Moscow’s Trash” that pejoratively depicted dark-skinned people from the Caucasus.

As it turned out, Rodina’s nationalist campaign from 2004 to 2006 was much more popular among Russians than Putin had expected. For the Kremlin, the threat was not so much that this would lead to a new wave of interethnic violence, but that Rodina’s rising popularity would take too many votes away from United Russia — or even overtake United Russia in the majority of federal and regional elections. This is was why Rogozin was forced to step down as party head in 2006 and then “exiled” to Brussels to serve as Russia’s envoy to NATO. Rodina was merged into a more moderate and tamed A Just Russia.

You would think that Putin would be more careful after having been bitten by Rogozin’s brand of nationalism. But United Russia is facing its worst crisis ever with ratings dropping below 40 percent in June, according to a Levada poll, and the Kremlin — out of desperation, it would seem — has little choice other than to co-opt Rogozin and exploit his nationalist rhetoric.

Putin and the United Russia leadership are playing with fire by courting Rogozin and his dangerous brand of nationalism and xenophobia. This may, indeed, be the only measure available to boost United Russia’s ratings, but in a country that is so divided along ethnic lines, stirring up Russian nationalism and anti-Caucasus sentiment can only lead to a rise in extremism and violence against ethnic minorities, particularly as Russia enters its second wave of the economic crisis.