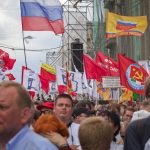 The prospect of astronomical fines, raids on the opposition leaders’ home, the threat of ongoing legal proceedings against those involved in May’s march and occasional bouts of rain could not, it would seem, dampen the spirit of the protest movement.  Today tens of thousands of people appeared on Moscow’s streets in a stand against the ruling regime.  From the BBC:

Tens of thousands of protesters, a sea of flags, banners and placards flowed through the centre of Moscow, he says.

The demonstrators chanted “Putin is a thief” and “Russia without Putin”.

“It’s obvious they are as frightened of us as they are of fire,” opposition leader Boris Nemtsov told the rally. “They are scared of the people’s protest.”

Mr Putin has vowed not to let Russia be weakened by “social shocks”.

“We cannot accept anything that weakens our country or divides society,” he said in televised remarks.

He dismissed the police order for him to report to them, saying: “The investigators will wait, I’ve made my choice”.