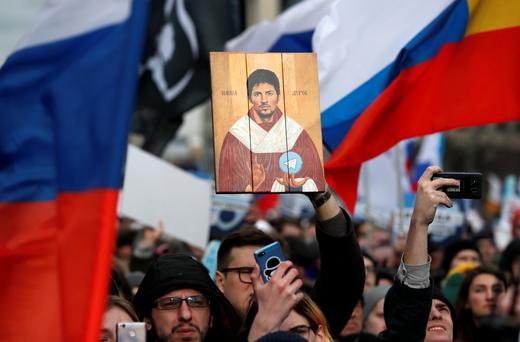 Thousands of people gathered in Moscow, Voronezh and Khabarovsk for authorized protests against the Kremlin’s recent moves to tighten Internet restrictions. NGO White Counter put the total number of protesters at 15,300, and Twitter users said that 15 people were detained in Moscow, although police did not make any official announcements of detentions. (RFE/RL has video.) The protest was sparked by a new draft bill that would require Russia’s internet traffic to travel through domestic routers, which will give the Kremlin much more control than it currently has. Satirist Andrei Bilzho spoke to the Independent about the new law that prohibits Internet users from critiquing the government. “Tomorrow you’ll make praising them obligatory,” he said.

Kirill Serebrennikov, the Russian director who has been under house arrest for two years, remotely directed his own version of a Verdi opera, which premiered in Germany. A group of pro-Kremlin activists stormed a feminist cafe in St Petersburg to deliver flowers, although they arrived during the hours when the cafe is usually closed to men, leading to an incident with mace.

Russia is the world’s second leading arms exporter, but it falls significantly behind the US, which saw 75% more exports than Russia from 2014-2018.

PHOTO: A man holds a picture of Pavel Durov, the founder of Telegram Messenger, during a rally to protest against tightening state control over internet in Moscow, Russia March 10, 2019. REUTERS/Shamil Zhumatov