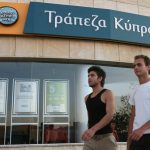 Cyprus, the divided island, whose Greek Cypriot government is recognized by the EU, has become a fully paid up member (if you’ll forgive the irony) of the southern mediterranean debtor’s club, with financial insolvency looming.   Just under a week ago, an article in the New York Times examined why the island is looking to the Kremlin for a bail out as opposed to Europe.  The article referred to the ties between the island’s President, Demetris Christofias, the self-dubbed ‘red sheep’ of Europe, and Vladimir Putin.  It also identifies the potential benefits for Cyprus, namely that it would entail less conditions than a loan from the European troika and that it would ensure that the island’s famously low corporate tax rate remains as such.  Today, Peter Martino looks at what Russia stands to gain.  Beyond Cyrpus’ enviable gas fields, there is also considerable amount of strategic geopolitical value, he argues:

Few regions in Europe have the importance of Cyprus. Situated on the doorstep of both North Africa and the Middle East, the island has been of strategic importance since ancient times. From Cyprus, the Russians will be able to reach the whole area surrounding Israel. Russia, an ally of Syria, has never been a close friend of Israel. This might change once Assad is toppled. Although the Russian bear has interests rather than friends, is in dread of anything resembling a democracy, and always on the prowl for its next lunch, the presence in Israel of many Jewish immigrants of Russian origin may lead to a slight rapprochement between Jerusalem and Moscow. If Russia, as a result of its interference in Cyprus, becomes involved in a quarrel with Turkey, this, too, might lead to superficially better, if unreliable, relations with Israel. The animosity between Israel and its NATO ally Turkey has been rising lately. There is little doubt that Putin, during this week’s visit to Israel, will discuss not just Syria, Iran and Turkey with the Israeli leadership, but also Russia’s growing involvement in Cyprus.

If Cyprus proves to be better off with Russia’s financial, political and strategic backing than Greece with the assistance of the European Union, the close relations between the Greeks and the Cypriots might convince Greece that it, too, should turn to Moscow rather than to Brussels for financial and economic help. A strategic realignment in the Eastern Mediterranean and the Middle East might then be in the offing. If the EU and NATO keep regarding the pro-Islamic government in Turkey as their preferred ally, before they know it they might be confronted with an alliance of Russia, Cyprus and Greece – a strong Christian-Orthodox axis against the Turks. And whom would this alliance target after that?