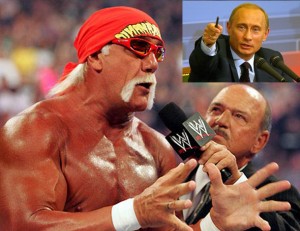 When it comes to pure theatrics and over-the-top vitriol, nobody can put a candle to professional wrestlers.  When my sons were growing up I recall watching the masters of the genre such as Hulk Hogan, Randy Savage (RIP), and the Ultimate Warrior talk trash, intimidate, and prime the audience for a bruising.  The “smackdown” interviews before the actual matches soon became the most popular and recognizable feature of this bizarre entertainment product:  they were fantastic and unrestrained and of course, totally phony.

Another kind of phony anger was on display this week from Russian diplomats, prompted into performance mode following leaked documents from the Obama Administration referring to a visa blacklist for certain Russian officials involved in the death of lawyer Sergei Magnitsky.

The Russian government – the vast majority of whom have nothing to do with the criminals behind the Magnitsky and Khodorkovsky cases – was nevertheless apoplectic.  Deputy Chairmain Leonid Slutsky feigned confusion over the sudden appearance of a visa blacklist, wondering why the Americans would want to damage the reset. “Maybe it’s a provocation,” he said.  Deputy Dmitry Vyakin said he suspected that Americans produced this blacklist as a red herring for the domestic audience, seeking to distract from the debt crisis (good luck with that argument).  A statement from the Foreign Ministry promised payback:  “Attempts to interfere in the course of the investigation and pressure judicial bodies are absolutely impermissible. (…) We will not leave such unfriendly steps unanswered and we will take adequate measures, protecting the sovereignty of our country and rights of Russian citizens against unjustified moves by foreign states.”

As for the most likely smashmouth candidate Dmitry Rogozin, perhaps he didn’t get the memo on the right talking points.  Instead today he harshly denigrated two Republican senators “monsters of the Cold War” and (kind of) praised the Obama Administration as the better option.  It was a more accurate and honest statement of the Russian government’s position, but it broke with the media games they are hoping to play this week.

So why should we care about this show and all the misleading headlines it is causing?  It’s one thing for politicians to flex muscles and beat their chests (remember Putin’s show in Munich?), but it’s an entirely different matter when the phony intimidation works:  according to the leaked Administration opinion on S. 1039, one of the reasons that the White House is recommending against Sen. Benjamin Cardin’s Sergei Magnitsky Act is the following:  “Senior Russian government officials have warned us that they will respond asymmetrically if legislation passes.  Their argument is that we cannot expect them to be our partner in supporting sanctions against countries like Iran, North Korea, and Libya, and sanction them at the same time. Russian officials have said that other areas of bilateral cooperation, including on transit Afghanistan, could be jeopardized if this legislation passes.”

Firstly, it’s important to recognize that the visa list represents a great step forward for creative policy approaches to human rights.  Unlike imprecise blanket sanctions, a targeted visa list only punishes the individuals involved in violations, disincentivizing their unlawful conduct, while the vast majority of Russian citizens are left unaffected.  The bereaved family of Magnitsky, his former coworkers and client William Browder should be congratulated for helping see this through, and I am sure that they will continue working hard for the passage of the full Sergei Magnitsky Act, which at least in my eyes has not been substituted by the already existing State Department list.

The bill faces stiff opposition, but is it really the case that the US would risk all the “gains” of the reset if it were pursued? Yesterday in testimony before Congress, David Kramer of Freedom House highlighted a number of reasons why the Act should be pursued despite worries about the reset:

The other concern raised by Russian officials and apparently shared by some in the U.S. is that passage of the Magnitsky legislation would sink the reset policy and end cooperation on issues like Iran, North Korea, and Afghanistan. If that’s the case, then the reset is extremely shallow and on its last legs, its successes grossly oversold. Russia presumably is cooperating with us on these strategic challenges because it’s in their interests to do so, not because they’re being nice to us and doing us favors. If they stop this cooperation because of the Magnitsky bill, then we really need to reexamine the relationship and the sustainability of the bilateral relationship. Moreover, the U.S. and Europeans should push back firmly against such threats and remind Russian officials that if they ended human rights abuses and held accountable those who committed them, such legislation wouldn’t be necessary at all. If Russia wants to be treated like a partner, then it needs to abide by the rules and norms required of a member of the Council of Europe and the Organization for Security and Cooperation in Europe. In addition, the Russian Duma has proposed retaliatory legislation that would blacklist foreign bureaucrats and public officials who have allegedly violated the rights of Russian citizens located abroad (e.g., the Viktor Bout case). This proposal is seen as a joke in both Russia and the West, and this administration should not lend it any credence but instead reject insulting comparisons between Sergei Magnitsky and arms dealer Viktor Bout.

As we have known for some months, Russia has been pushing very hard with frequent visits from diplomats to both Washington and Europe to discourage or influence the Magnitsky list legislation – not precisely that they care whether or not a lowly crook like Pavel Karpov can get a visa – but rather because they are concerned about the possibility of bank accounts being frozen under this legislation, with the worry that this tool may come to affect them in the future.

It might be unpleasant to recognize, but there are criminal elements operating within institutions of Russian government, and Washington knows this.  You may recall the WikiLeaks revelations of one Spanish prosecutor confessing that the line between mafia groups and certain departments within the ministries was too blurry to discern, while the Italian Embassy had already identified the go-between bag man for Putin and Berlusconi to do business.  The number of people employed by the state has exploded under Putin, the level of business done by officials has skyrocketed, creating multiple conflicts of interest that even President Medvedev has noted.  Those using their office for self-enrichment seldom feel comfortable keeping their stolen money in Russia, and so begins the money laundering and foreign bank accounts.  Just look at Russia’s $46 billion in capital outflows in six months despite a recovering economy and high oil prices.  The idea of account freezing under the Magnitsky legislation upsets the bureaucrat’s dream of retirement, even if their run-of-the-mill corruption had nothing to do with killing the poor guy.

The problem is one of perspective.  The current approach taken by Washington acknowledges to itself (but not to the voting public) that the Russian government is corrupt, but that positive change can be produced from within the system and from within the current batch of leadership.  To borrow an example from Indonesia and Nigeria, they believe that the Russian leadership is a type of “stationary bandit” as opposed to a “roving bandit,” and although it’s clear that profound corruption has poisoned the structures of governance, they believe that these people will eventually do good for the country and do good for US interests, especially in the sticky international areas of the campaign in Afghanistan, Iran, and North Korea.  But this leadership is only sticking around as long as it takes to get their money out, and possibly the reset policy is only sticking around until after the next election.  Russia’s leaders, at least the ones that matter, do not have plans to strengthen the country for the future but rather to fatten their own wallets:  why else would they be more angry about a blacklist than upset with the people who actually committed the crimes and remain unpunished?

One would have thought that the US government would have learned from WikiLeaks that it has to stop lying to its citizens.  In their published opinion on S.1039, Washington willingly plays along to the pro-wrestling-style banter, arguing that the legislation shouldn’t be pursued because they are so scared of the threats that Russia will bring down the reset, encumber the NATO mission in Afghanistan, and change policies on Iran.  There are no words to explain how crazy it is that we have arrived to this point, where Russia pretends to be angry over getting exactly the policy they preferred (and successfully turning the Administration against the legislation), and that they do so while threatening to go against their own interests.  It’s like another version of Russia’s habit of creating international problems, and then offering solutions to gain leverage.

Does Russia enjoy having a NATO presence in Central Asia?  Not exactly, but they much prefer that the alliance remain bogged down in protecting their own national interest.  While Afghanistan, as well as Iran, certainly pose secondary security threats to the United States, they pose an existential security risk to Russia.  Just ask any Iranian how they feel about the Russians, and the calculus begins to change.  The very last thing that Moscow wants is NATO’s failure in Afghanistan and the possibility of a massive region wide Islamic insurrection, which eventually would reach all the way into the Caucasus.  They are not going to change their policies on these important issues over the Magnitsky list.  The threat is totally bereft of substance, and so is Washington’s excuses to protect the reset.

So the news of a preexisting blacklist is a bit of a mixed bag:  team Magnitsky definitely won the day, but given all the unnecessary posturing, Russia is pursuing a longer-term strategy of defeating the much more important legislation, with a politically weak administration willing to play along by faking an extremely naive sense of Russian interests.  Enjoy the show.