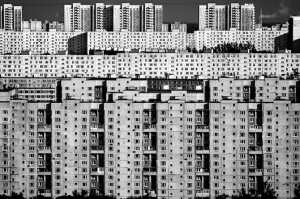 Much of political analysis in Russia these days focuses on President Vladimir Putin’s ability to balance competing interests within the elite, while at the same time managing always-present destabilization risk through a mixture of repression, nationalism, and pandering.  But the analysis becomes confusing doesn’t it always?) when the intra-elite disputes shift between clans, competitors, and ministries, and the uncertainty of public discontent with the government moves to new and different sources.

For example, according to OVD-Info, an independent rights group monitoring arrests at demonstrations, there were approximately 228 anti-government rallies held just in the Moscow area in 2012.    While 49 of these protest actions were in support of political prisoners and 44 protests generally against Putin’s return to power, what about all the rest?  Perhaps as a definition of the fragmentation of the Russian opposition, there are dozens of different motivations bringing people out against the state – and these drivers of discontent can change and ignite at a moment’s notice.

The dire housing situation, for example, could easily become a major sore point for the government in 2013.  Consider some of the issues raised in this translation of an article published in Gazeta.ru.

Public discontent with housing sector is reaching a critical level. The government, meanwhile, isn’t promising anything but further cost increases.

According to VTSIOM, in January 2013 “the situation in the housing sector” was the first problem among others that Russians were aggrieved with: it was mentioned by 54% (last year the figure was 47%, and in January of 2009 – 29%). People have less anxiety about the low standard of living (46%), the situation in the health sector (43%) and corruption (29%), not to speak of the “state of morality” (21%).

It is not surprising.

Russian housing and communal services’ quantity and quality are on the level of the past century, failing to surpass Soviet standards.

But instead of almost symbolic prices of the Soviet period, people pay nearly western-level costs that grow steadily year by year.

Citizens have always been assured that that paying full cost for substandard utilities, energy, heat and water will eventually boost the standard of living and freely competing providers will avoid inflating prices.

As in other sectors, market competition in the housing is nearly crushed. The housing business, merged together with government, freely imposes its full set of low-quality services for absurdly high prices.

The densely corrupt bureaucratic environment of our housing sector discourages any innovation, even reasonable innovation, and uses its position against the people. Installations and subsequent regular upkeep of the electricity, water and gas room meters has turned into a way to take extra money out of homeowners. Each year, increasing prices for gas and electricity enrich the monopoly providers without any efforts on their part to improve services.

Everyone feels good in such an atmosphere of irresponsibility, incompetence, and easy money, except for the +100 million Russian citizens.

In the provinces, another increase of tariffs will hit the peoples’ wallets particularly hard. The silent mass discontent, so far only recorded by polls, may not remain silent for very long.

Furthermore, it is interesting to know that there is a structure in charge of zhilkomhoz (Housing). And it turns out that they are not sitting idly by.

The main structure in this area is a state corporation called the “Housing Reform Foundation” . It is said that the foundation would only help its own employees by paying extremely high salaries.  And there’s more. In 2013, this corporation promises to distribute 1.16 billion rubles among Russia’s regions as “a bonus for the effective implementation of the regional target programs and the effectiveness of housing reform.”

This amount of 1 billion looks serious. But only as long as it is not compared to the approximately 2.5 trillion rubles which ordinary people spend on the utilities.

The upper levels of the power hierarchy are now entirely focused on issues that are more interesting and important for them personally.  Thus, growing problems in the housing sector are entrusted to regional and municipal authorities. If they did not “reform” the sector, they could have tried at least to slow down the price increases.

Local budgets are over-extended. Almost the entire package of Putin’s generous campaign promises was shifted to the regions, including higher salaries for teachers, doctors and cultural workers. The federal government does not want to transfer real revenue sources to the locals because it does not cope well with its own costly undertakings. And the only fruitful idea that exists today is to increase real estate taxes starting 2014, and to use this money to strengthen local budgets. But in reality it will only mean additional exaction of money from the housing, which will increase the burden that people already have.

Housing faces the same problems as other areas the bureaucratic machine supervises directly or indirectly.

The government cannot and does not want to improve the service system and therefore preserves the low quality. At the same time, the appetite of the bureaucratic machine and its affiliated businesses alongside all the rising costs. It is a sort of a business game that is played as long as consumers do not reach the limit of their patience. As for the housing, in many ways the limit is quite close.