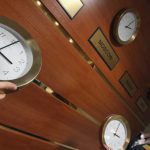 In February of this year, President Medvedev decreed that Russia would not follow the long-standing practice of turning the clocks back one hour at the end of October, but would instead remain in a permanent temporal, if not meteorological, summer.  Yesterday chaos was apparently manifest, as people were confused about whether the decision had in fact been made law.  Today, reports came in of problems for Russia’s financial sector, which is now four hours behind London.

The aptness of this as a metaphor for Medvedev’s political career has not been lost on Russia watchers.  The President has, since the announcement that Putin would return to the Presidency next year, been described variously as a seat warmer and lame duck.  An attempt to regain credibility through the unlikely medium of badminton, only provoked more derision.  Today an op-ed from Alexei Pankin in the Moscow Times has picked up on how the President’s predilection for the Internet has been not been taken as a sign of cutting edge dynamism, but rather the glaring stasis of a political screen saver: According to a joke that circulated during the breaks at the recent Russian Internet Week forum, Prime Minister Vladimir Putin did not allow President Dmitry Medvedev to run for a second term because Medvedev spends too much time on the Internet. The forum is the main annual event of the domestic Internet industry and closely reflects the main development trends in this most dynamic of all segments of Russia’s public life.

There is an element of truth in every joke, as the saying goes. Medvedev’s reputation as the main blogger in the country has clearly not helped his image.

Perhaps Medvedev was a victim of his own clumsy propaganda machine. Each of his short Twitter messages, such as a recent announcement of an upcoming televised meeting with supporters, becomes headline news and is aired several times a day on all state-controlled national television channels. Eventually, any viewer — from the simplest to the most sophisticated — cannot help but become disappointed in the blogger-in-chief.

But the most important revelation to come out of the Internet forum was the finding by various research agencies that there is no reason for politicians to direct much of their time or resources at the Internet audience.

Yes, the number of Internet users in Russia is growing rapidly, with 60 million people 12 years of age or older going online at least once per month, and 40 million surfing the web daily.

What’s more, the digital divide is shrinking. The most dynamic growth in Internet use is now among older individuals and residents of cities with a population of 100,000 or less.

But what are those people looking for on the Internet? Aсcording to the Public Opinion Foundation, about 50 percent are interested in health and sports, but only 20 percent are interested in politics — fewer than those who want information on tourism and travel. The director of the Hyde Park social network corroborated these findings, saying the “politics” tag ranks in 29th place and attracts no more than 18 percent of all users.

Even more depressing is the limited sway that the Russian Internet has in mobilizing users to become active in social causes. One popular blogger, Sergei Dolya, led a campaign for a national trash cleanup day that, even with support from traditional media and national television, managed to mobilize only 16,000 volunteers from Kamchatka to Kaliningrad. And that is considered one of the most effective mobilization campaigns in the history of post-Soviet Russia.