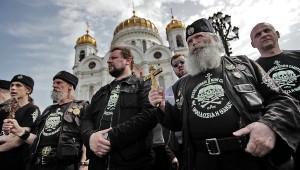 Scarcely a gay rights parade or Pussy Riot support action happens these days without the presence of a group of orthodox believers, holy water at the ready to douse sinners in insults and imprecations, sometimes even blows.  These devout activists are of course simply following the lead of the religious authorities, who waste no time in identifying their enemies. On the basis of a dossier compiled by Sergei Bychkov for the Novaya Gazeta, the Foreign Policy Research Institute’s David Satter reveals how the Church’s leaders are responsible for a fair amount of hypocrisy.  Quoted beneath is just one of the examples used.  From Eurasia Review:

In 1993, a financial group, “Nika,” was created with the participation of the Moscow Patriarchy. Its vice president became the archpriest Vladimir Veriga, at the time the commercial director of the Department of External Church Ties (DECT), which was run by Metropolitan Kirill. After a year, there appeared two commissions on humanitarian assistance, one connected to the Russian government that determined which “humanitarian assistance” it was possible to free from taxes and excise duties and the other connected to the DECT, which sold the goods, including cigarettes and alcohol, to commercial structures. In this way, a large part of the humanitarian assistance that was freed of taxes was sold through regular commercial channels at existing market prices.

According to figures from the government commission on humanitarian aid cited by Novaya Gazeta, in 1996 alone, the DECT imported eight billion cigarettes. This was a serious blow to the tobacco barons of the period who were obliged to pay duties and excise taxes and, as a result, could not compete with the Church. This business was carried out despite the fact that Orthodoxy considers smoking to be a sin.