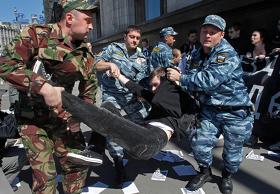 Aside from being heralded as a grave affront to democratic freedoms in Russia, the new bill raising fines against violations during rallies has been branded by many as simply ludicrous and almost inevitably counter productive for the Putin regime.  Thanks to the Washington Post for making clear just how definition-defyingly extreme this proposed change to legislation is, by a series of comparisons:

A sampling of other offenses and their maximum penalties under Russian law: