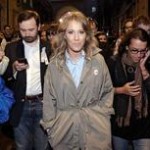 Ksenia Sobchak has proved an inscrutable figure in Russia, both for the authorities, to whom she is linked by family and fortune, and the opposition, to whom she is linked thanks to her own efforts as a self-styled anti-Kremlin figurehead.  As has been documented at several occasions, Sobchak was subject to considerable scrutiny by the opposition when she first made her overtures towards it.  This year however, as the Kremlin has become increasingly unforgiving towards dissidents, Russia’s ‘Paris Hilton’ as she is (fondly or pejoratively) dubbed, has taken an increasing amount of heat.  The latest example of course, is the seizure of $1.7 million from her apartment during a police raid, and the less-than-enticing possibility of a tax evasion investigation.  The New York Times has a particularly expansive profile of the woman who can claim 470,000 Twitter followers, which may give some indication of just how influential she is:

Anton Nossik, one of Russia’s leading bloggers and a pioneer of the country’s digital news sites, warns against underestimating Sobchak. “The risks are real,” he insists, “and what she’s doing, it may end up being more important than the work of any other oppositioner. Putin has the powers of Kremlin behind him. But she’s got something he does not: the fans.” President Obama’s new ambassador to Russia, Michael McFaul, fighting his own squabbles with Russian officialdom, recognizes the opportunity. Within weeks of his arrival in Moscow, he tweeted Sobchak: “Want to come on your show Gosdep soon. Lots of myths to debunk.”

In the wake of the presidential election, the opposition has developed a new means of self-defense: a small tech-savvy corps able to launch rapid-fire counterattacks, posting evidence to YouTube, Twitter and an ever-growing array of popular Russian Web sites. No one has deployed the digital arsenal to greater effect than Sobchak. As her political critique intensified, she made a series of mock campaign ads — parodies of the Kremlin campaign that enlisted artists and actors to support Putin. One faux ad featured Sobchak speaking haltingly, like a hostage at gunpoint, to praise this candidate who’s done so much for Russia — without mentioning Putin by name. On YouTube, the video was seen more than two million times.

An estimated 66 million Russians use the Web every day — the largest such national population on the European continent and one of the fastest-growing in the world. Russians have adopted the Web not only as a public sphere for debate but also as a refuge of last resort, a citizens’ court to vent anger at and post evidence of official malfeasance. Videos depicting supposed police abuse, state theft and even car accidents go viral in minutes.

The digital frontier has updated the 19th-century fight in Russian literature, the struggle between fathers and sons. Now the old guard, the first post-World War II generation to come to power in Russia, is squaring off against “the Generation of the Naughts,” those who came of age in the first decade of the new century. In Moscow, and on the Web, they call themselves the kreativny klass (the creative class) and stud their speech with borrowings from English, praising not only brendy (brands) and trendy (trends) but tolerantnost as well. Sobchak may bridge the generations better than anyone, straddling various media platforms, and worlds, with friends among the oligarchs and state officials.