Stanovaya: Behind the Surkov-Volodin Shuffle

The following is an exclusive translation of an article published by Tatiana Stanovaya on Politcom.ru on 16 January 2012. 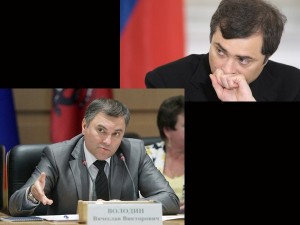 On the 27th December news came out of the transfer of Vladislav Surkov, from first deputy head of the presidential administration to the deputy prime minister for modernisation. In his place, Vyacheslav Volodin, the previous head of the governmental apparatus in the Kremlin, deputy prime minister and the de-facto head of the pre-election campaign team of Putin has been named. A long-time speechwriter of Yeltsin, Putin and Medvedev’s, Johann Pollyeva has also left the Kremlin. The configuration of authority is gradually forming under the future President Putin and Prime Minister Medvedev. However, it is too early to talk about any definitive downfall or any take-off in the careers of these men.

The transfer of Surkov to the government wasn’t news in itself: rumours had been circulating in the media that “Putin would not work” with the ideologue of ‘Sovereign Democracy’ after his election to the top job. What will be news, however, is when Surkov will leave the Kremlin, and who will be his successor. The resignation of the creator of Russian policy, often considered the architect of the well-established political system ‘Putin’s regime’ and as the ideologue of ‘Putin’s course’, is most probably due to the mass protests last December. The timing of his departure was chosen perfectly given the present political situation. More than that, the political risks for Putin before the election were minimal as all the principal functions of political management had been taken over already by Vyacheslav Voodin.Thus, Surkov’s departure doesn’t complicate, but actually makes governance easier, given the current competition between the spin doctors in the Kremlin and those in the White House. In addition, Surkov and Medvedev have recently become closer, which explains his transfer into the government, which the current president will head, in May.

Judging by his last interview, Surkov himself has long been preparing to leave. In the final period before his departure he has tried to improve his image in the eyes of the liberal section of society. Though in an interview to ‘Izvestia’ Surkov’s allegations that Medvedev’s political reforms were an answer to the protests (something which Sergei Haryshkin and an anonymous source in the Kremlin actively deny) and that the genuine pluralisation of the political situation is frustrated by ‘a few influential people’ seemed odd and out of place. In concluding the interview he even stated that there are people in power who believe the activities of the opposition are beginning to decline and that reforms can be slowed down. Possibly alluding to his competitors working for Putin, he noted that “For some it seems that there is no need to do anything that it is useless to worry about it. They believe that everything will resolve itself magically. Thus, again they slow down change, they put off reform until a better time, or they castrate any possibility of reform”. These words were uttered four days before his transfer into the government, where Surkov will be engaged in modernisation and innovation, including improving relations with foreign investors, for many of whom, Surkov’s reputation is odious.

The arrival of Surkov into the government is perceived as a demotion, which is understandable. Firstly, the scope of his powers has been revised and narrowed drastically. Secondly, there is now public concern for problematic and socially harmful or politically unimportant spheres of governmental activity (reform of healthcare, education), demographics, and co-operation with religious groups. Thirdly, modernization and innovation are political projects, which will not be allocated adequate substantial resources, nor which are part of specific economic policies. All this remains to be accomplished, and much depends on the capabilities of Medvedev as Prime Minister.

In the meantime, the government has approved a temporary division of powers (until the final formation of the cabinet after the presidential election). Surkov’s main authorities will include the entire scope of the former Deputy Prime Minister Sergei Ivanov for Science and Innovation, as well as almost all of the powers of Alexander Zhukov in the social sphere, who moved on to the State Duma. However, many media outlets interpreted this distribution as a significant defeat for Surkov. Nonetheless, there is no point in rushing to conclusions. Firstly, Surkov obviously has not been appointed to the government instead of Vyacheslav Volodin, but this means that he cannot even claim his authority (that is being a political deputy prime minister and right hand to the Prime Minister in a governance sense). Secondly, his real weight and resources will become clearer only after the formation of the Cabinet of Ministers headed by Dmitry Medvedev. Much will depend on who will lead the economic bloc. It is possible that the current president of the cabinet will take his aide Arkady Dvorkovich, in which case the modernization of the economy will be affected.

But it will be Igor Shuvalov who will receive the main dividends of the redistribution of powers in the government (the issues of migration policy, and of transport and communications have been transferred to him) and Kozak (In fact, he has legitimized his status as the main person responsible for the redistribution of powers between levels of government). This can be seen as their chance to continue their work under the premiership of Medvedev. The powers of ministers Igor Sechin, Alexander Khloponin and Viktor Zubkov, remain the same. However, the latter, for example, has been appointed by the head of state to the leadership of the working group for combating financial crime. It appears that thought he had already been written off (there were rumors in the media that he would leave the government after the elections of deputies of the Duma), the former head of the Federal Financial Monitoring Service is in demand for the future transformation of the power system under the new balance of power. This decision should be read in conjunction with the strengthening of Sergei Ivanov’s position, the designated head of the presidential administration. Medvedev, in fact, was not allowed to appoint a head of AP [Agency for Privatisation], even for a few months before the election. This can be seen as part of the tactic of “castling.” In January, Ivanov was appointed by Medvedev as head of the presidential council to fight corruption.

In general, it can be seen that while the transformation of the power system is in Putin’s interests, the presidential administration is being cleansed from unclaimed figures (like Naryshkin, who was “Putin’s man” in Medvedev’s administration, and now provides Putin’s control of the Duma), and Putin’s people are coming into the vacant seats, without waiting for the end of Medvedev’s power.

While still in government Medvedev is getting an increase of influential figures. In addition to Surkov, Dmitry Rogozin has joined, to whom Putin is attracted more for his own political purposes, limiting his scope of authority only to the MIC (transport and communication were given to Shuvalov). In fact, Rogozin got his position as a reward for political loyalty in his support of Putin and the campaign of “United Russia” (with the help of the “virtual” KRO). The problem of Rogozin’s excessive activity as the new deputy Prime Minister (he has already promised to clean up the defense industry and space industry in record time) will have to be solved not by Putin, but by Medvedev. It is also significant that if the head of the AP is a protégé of Putin, the head of the government apparatus in place of Volodin is not from Medvedev’s camp, but Anton Vaino, the former head of Putin’s protocol.

Volodin’s arrival in the Kremlin could be called a new era of political governance. Volodin comes from the Saratov region, which still retains considerable political influence. At the federal level, he began his career in the OVR bloc of Yuri Luzhkov, as a representative of the Saratov political elite. In December 1999, Volodin was elected to the Duma, and from 2001 he led the faction of the same name. In January 2003, when “Unity” and the ISI joined forces, he became one of the leaders of the new party “United Russia”. By 2008, he had become one of the most influential leaders in the ruling party, who worked closely with Surkov and competed for influence against Boris Gryzlov. After a couple of years, Surkov and Volodin’s relationship turned more competitive due to the alignment of Volodin and Prime Minister Vladimir Putin. The final “divorce” of Surkov and Volodin came with the appointment of Putin’s last chief of staff in place of Sergei Sobyanin, who became mayor of Moscow. After that, within the government an alternative center of political management began to take shape in the Kremlin.

Unlike Surkov, Volodin is a senior party functionary with experience of public political activity and participation in competitive elections. Within ‘United Russia’ and the Duma, the position of Volodin’s people (Sergei Neverov, Victor Kidyaev, Igor Rudensky, Nikolai Pankov) has been reinforced. . Volodin himself has gradually begun to form his own team. The prominent political analyst Dimitry Abdovsky, who until now was worked as an assistant to Volodin in government, has been named deputy chief of domestic policy (run for now by Konstantin Kostin). According to “Vedomosti”, over the next few days the curator of the new Kremlin will appear in the regions. The post of Head of Regional Policy of the same department will be taken by a veteran of combat operations in Afghanistan and Chechnya Alexei Romanov. As a member of ONF, he oversaw the work with citizens in the public reception of Vladimir Putin, working together with Mikhail Babich (who is also close to Volodin, and at the end of last year was appointed presidential envoy in the Volga Federal District). At the Congress of “United Russia” in November Romanov proposed the nomination of Putin for the presidency after Stanislav Govorukhin. Sources from Forbes maintain that Volodin supported the resignation of the governor of the Arkhangelsk Ilya Mikhalchuk (though as Medvedev had earlier strongly criticised the governor, his resignation was really a matter of time). Potential “retirees” are also the governors of Saratov, Volgograd and Kaliningrad regions: Ipatov Paul (with whom tensions had long since formed with Volodin), Anatoly Brovko, and Igor Tsukanov. Only Surkov;s head of staff Nikolei Reshetnikov has left to enter the government with him.

With the departure of Surkov from the Kremlin the end of the era of total domination of the political power can be discussed, built through institutional political reform from 2004 to 2007 as well the idea of “vertical” power, based on a high level of trust in the leadership of Vladimir Putin. Volodin has inherited a political system in which power remains the most influential resource, but he will be forced to maneuver and take into account the opinion of at least a part of the political opposition. It is unlikely that Volodin will fundamentally reshape the mechanisms of the existing managed democracy. Rather, his function will be focused on enforcement problems and on the minimization of the impacts of policy reforms on the “vertical of power” – though much will depend on the capabilities of the opposition, which in many ways will become clearer after the meeting on February 4.